The sixth season of AMC’s The Walking Dead ended on a cliffhanger that enraged many fans, rather than intrigue them.

In this final episode of the season, we finally saw Jeffery Dean Morgan as the foul-mouthed and charismatic Negan, the most popular villain of The Walking Dead comic series.

Similar to the character’s debut in the comics, Rick and his group are captured by the Saviors, Negan’s hostile team of survivors,  and one of Rick’s crew is chose at random by Negan to be brutally murdered with his baseball bat named Lucille.

While it’s very clear who dies in the comics (we won’t say who here, but feel free to look it up), it is left a mystery in the show, as in the final moments of the season, we see from the point of view of Negan’s poor victim.

Needless to say, this ambiguity upset much of the show’s fan base, and it looks like the actors themselves don’t even know who bit the dust.

In an interview with EW, the episode’s director Greg Nicotero revealed that the cast had no idea who would die when filming the scene, and it was specifically filmed to be that way.

“The show was always intended to end on that point of view and go to black where we would continue to hear the impact of the baseball bat and the screaming and the crying, and the reactions,” Nicotero said.

The director went on to explain that in the comic series, a cliffhanger ending is often used, and as the TV series continues to deal with darker themes, like the comic, the show “deserves”a dark ending.

“It’s unfortunate that some people are very vocal and very negative about the choices that we make, but the bottom line is that this is a show I would watch,” explained Nicotero.

He even further addressed why the cliffhanger ending was chosen:

“It’s agonizing to have to wait, but this was the end of our story, and we have an entirely new story coming up. Next season is really Negan’s story and how our group has to deal with who he is and what his way of life is, so I think it’s the perfect ending to this season: watching everyone on their knees, stripped down to the barest vulnerability, and knowing that the cavalry’s not coming over the hill. Our group has never been in this situation before, so I think it’s the perfect opportunity. We had early conversations about, would we show who it was at the end of the season? Yeah, you always have discussions of what’s the best story. I was very passionate about ending this season on a cliffhanger and not knowing, because I feel like it propels us into next season in a great way. So people can be upset. A week from now, they won’t be upset anymore, and it’ll be fun.”

While we think the cliffhanger ending was a little cheap, considering how unexpected the death felt in the comic, Nicotero is right: people will eventually stop being upset, and will probably begin feverishly guessing which character won’t be around next season.

Which character do we think died? That’s a discussion for another time.

The Walking Dead returns this fall on AMC. 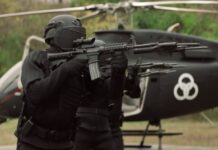 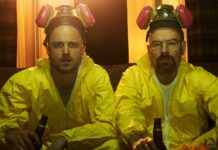