BEE careful BEEcause it's BEEry challenging (GET IT?!).

It’s impossible to talk about Yooka-Laylee and the Impossible Lair without bringing up its predecessor. Yooka-Laylee, the kickstarted 3D platformer developed by Playtonic Games (a team largely made up of talent who worked at Rare and on Banjo-Kazooie for the N64) received mixed reviews and was criticized for relying heavily on clunkier gameplay elements from the golden age of 3D platformers. Two years later, Playtonic Games has revealed they haven’t forgotten how to make a great game, and all they had to do was go to the second dimension. Yooka-Laylee and the Impossible Layer is an impossibly great 2D platformer that embraces the best features of its contemporaries.

The game’s story, unsurprisingly, is very simple. The heroic chameleon Yooka and bat Laylee must rescue the captured Royal Beetalion Guards and confront the villainous Capital B in his Impossible Lair to prevent him from using his mind control device, the Hive Mind. (I hope you like bee puns!)

The simple story and immediate setup of the game shouldn’t feel out of place, because as Yooka-Laylee pays homage to Banjo-Kazooie, The Impossible Lair is clearly inspired by Donkey Kong Country (a series originally developed by Rare as well). If this isn’t immediately obvious, it will be once you start playing. Yooka controls with the same weight and precision of Donkey Kong, and Laylee even rolls on him like Diddy Kong does (in DK Country Returns onward) with the tap of a button. This is not a bad thing, far from it. The platforming in The Impossible Lair feels really great; never slippery or cheap, and you always have control over your jumps and momentum.

What keeps Yooka-Laylee and the Impossible Lair from being a knockoff of DK Country is how it intelligently integrates features from the best modern 2D platformers. When you die in The Impossible Lair, you don’t lose a life. In fact there are no lives, you just restart at the last checkpoint, similarly to Rayman Origins and Legends. This may seem insignificant, but it really keeps you from being discouraged by a difficult part of a level and allows you to think through how you’re going to tackle a tricky section. It’s hard to believe that New Super Mario Bros. U or Donkey Kong Country Tropical Freeze, two games The Impossible Lair is also clearly inspired by, still use the lives system, because going back to it after playing games like The Impossible Lair makes them feel archaic and trapped in the past. 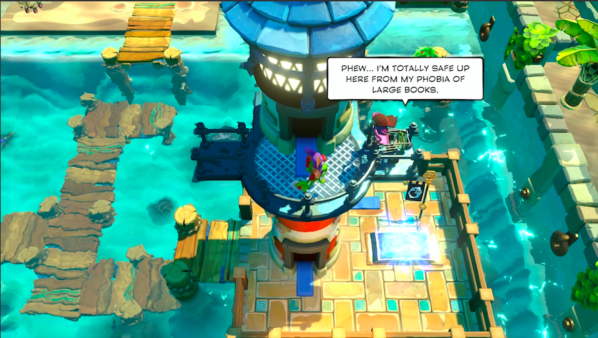 The game’s overworld is another updated and surprisingly robust element of the game. Unlike other modern platformers that just use a line graph you statically move through to get to the level, The Impossible Lair has an explorable overworld that in itself feels like a massive level with lots to do. There are a number of puzzles to solve, shortcuts to discover, and collectible tonics to find that change in-level properties (like Laylee being invincible longer after taking a hit or giving the level a black and white filter). Think Mario+Rabbids: Kingdom Battle but with even more content. (It even has an earworm theme from Banjo Kazooie/Mario+Rabbids composer Grant Kirkhope that slightly changes based on where you are, like Gruntilda’s Lair!) Exploring the overworld and solving puzzles surprisingly became one of my favorite aspects of the game, as there’s a lot to see and it’s extremely satisfying to reach a new area or even change the overworld’s climate to completely remix the layout of a level. 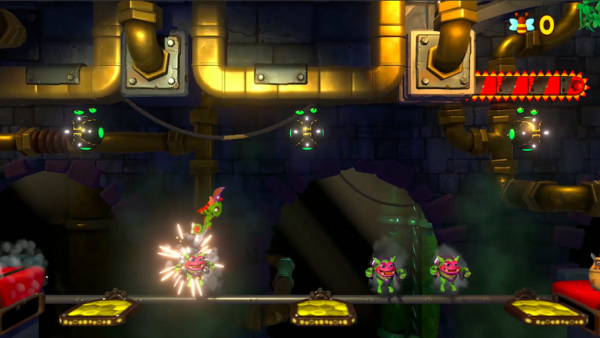 The best part of Yooka Laylee and the Impossible Lair though is the Impossible Lair itself. From the very beginning of the game, you have access to and can try and beat the final level, but you probably won’t be able to. It’s an extremely challenging and extremely long gauntlet of platforming. It’s like the last level of Super Mario Land 2 on steroids. Unless you are a platforming god, the only way you’ll be able to beat the game is by completing levels to save Beetalion Guards who will act as a hit for you in the Impossible Lair. There are 48 Beetalion Guards in the game (40 total levels and eight hidden in the overworld), and even with 48 safety nets, you’re going to be spending a lot of time challenging the Impossible Lair…and it feels so good. I had a ridiculous amount of fun going back to the Impossible Lair after a level or two and seeing how much farther I could get. It’s satisfying, rewarding, and the freshest idea in a platformer full of fresh ideas.

Yooka-Laylee and the Impossible Lair isn’t a glistening, Triple-A title representing the pinnacle of platforming. It’s small in scope and often feels like it was brought forward in time from a past era due to its simple presentation and minimalist approach, but all that was never the focus of the game. Instead, the game feels like a second chance at showing the potential of the Playtonic team, and in that regard, it absolutely shines. This game radiates heart and was clearly made by a team with the credentials and skill to make an incredible and refined 2D platformer, and that’s exactly what they’ve done. If you’re a fan of platformers, and haven’t already, take on the Impossible Lair.

Yooka-Laylee and the Impossible Lair is available on PC, PlayStation 4, Xbox One, and Nintendo Switch.