The 2D shoot-em-up arcade style game, Teslapunk, is a part of Xbox’s indie program, ID@Xbox. It takes the nostalgic feel of those classic scrolling arcade shoot-em-ups, and treats us to a barrage of lasers, Martians and enemy ships – accompanied by a generous helping of humour, with a fun soundtrack to boot.

KlutzGames successfully manages to pay homage to the arcade classics of yesteryear, whilst offering up one heck of a challenging game.

Teslapunk comprises of two main game modes, arcade and survival, with the additional challenge of 33 missions, which can be accomplished throughout arcade mode.

The general premise of the game is that you are defending Earth against Emperor Zangórax, whose known in Martian circles as a top DJ, but to the folks of Earth, he is one giant green threat to our fair planet.

Arcade mode is the main event, and it is a veritable assault on the eyes right from the get go, as your attacked every which way from flying enemy ships that hurl lasers and fireballs. There are two primary weapons in your ships arsenal – the ‘Spread Shot’, and the ‘Laser’ – and each one is more effective against the varying sized ships that are out to get you; meaning you use them tactically.

Throughout the levels (of which there are six in total) it gets increasingly more insane and difficult, with the onslaught of enemy fire never letting up for a second – it certainly keeps you on your toes.

One of the biggest strengths this game has lies in the challenge it poses to players. Each level feels harder and more intense, and you find yourself more and more determined to best the level and conquer the big boss fight that takes place at the concluding section of each level.

The boss fights themselves are clever and refreshing each time, as they attack and move in completely different ways, which adds to the challenge and strategy side of the game-play, and makes them feel more individual.

As you have to dodge your way around the often times overwhelming sea of enemy fire, and use the different shooting styles to inflict damage against them, the game tests your reaction time, and firing prowess.

At the same time, as there are only two shooting styles – with an additional power up mega attack – the game-play mechanics are not too varied, and sometimes it can feel like all your doing is button mashing. But this doesn’t really take away from the enjoyment of the game-play experience too much, and the variety in the levels themselves more than makes up for it.

Survival mode sees your ship scroll along a fixed route, with barriers and obstacles you have to blast out of your way in order to keep going. It pushes you to make quick decisions, and hope to catch a falling bonus that will make your life easier, all the while collecting as many coins as you can from destroyed ship barricades to buy yourself some upgrades.

The design of the game certainly has a nostalgic feel, with a cyberpunk, space-age look. The designers of Teslapunk used old photographs and books of industrial, technical features, such as turbines, transformers and other large pieces of machinery from the 20th century. It certainly gives it a quirky side that is reminiscent of some old arcade games of the same genre, but with a hint of uniqueness to it.

On the right-hand side of the screen in arcade mode, we have that pesky Martian, Emperor Zangórax, making humourous quips and anecdotes as we try to destroy him throughout the levels, which adds a decided charm to the game.

However, it’s so easy to miss these delightful words of wisdom from the green meanie, because you’ve got to be so aware of enemy fire. When you’re so focused on firing away at the opposing ships, glancing away to see what Zangórax has to say can be a little difficult.

Having said that, chances are you’ll be doing the level again, since the levels are certainly no walk in the park, so you’ll most likely catch the Martians jokes the second, or third time around.

It’s hard for games of this genre to feel completely original or new, but for fans of shoot-em-ups and arcade games, Teslapunk is a very challenging, fun game, that may well be more suited to pros of the genre, but a novice will undoubtedly get a kick out of it too. If nothing else, Teslapunk is sure to get you brushing up on your reaction times until you’re an untouchable master of the genre. 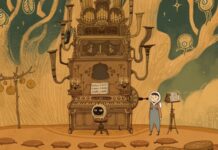 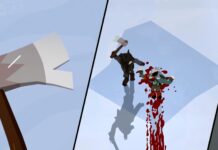 Indie Game Spotlight: Bloodroots, a Game of Violence Where Everything is a Weapon 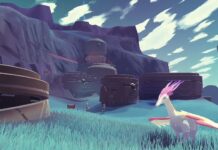 Indie Game Spotlight: Haven – A Game of Love and Exploration