Allegedly Hailee Steinfeld was Disney's top choice all along.

According to most reports Bumblebee star Hailee Steinfeld was Disney’s top pick to play the role of Kate Bishop in their upcoming Hawkeye series which appears to begin filming in New York City within the next week or two. However, after Hailee Steinfeld signed on with Apple TV’s Dickinson the likelihood of her appearing in Hawkeye was doubtful.

But that may have changed.

Late last night the actress posted a photo to her Instagram which looks incredibly similar to Kate Bishop from the comics along with the caption “see u in ✨11✨ days, 24. 🏹.” You can view the Instagram post below. 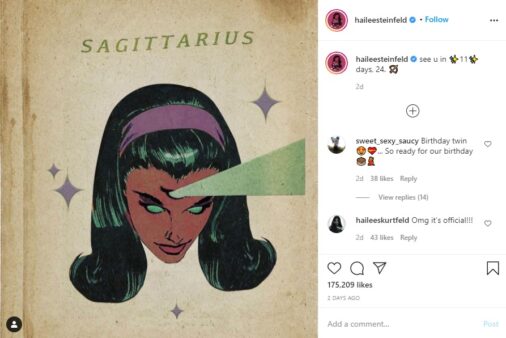 It’s worth noting Hailee Steinfeld turns 24 in 11 days so this may be nothing more than just a shout out to her own birthday. But then again, that last emoji is hard to ignore. Looks like we’ll just have to wait and see.

Hawkeye will arrive in the fall of 2021.