Earlier today, news broke out that Herschel “Guy” Beahm IV, better known on Twitch as “Dr. Disrespect” was banned from the streaming service. Fans were quick to assume this was no big deal, possibly even DMCA related, which would have been likely reversed immediately. However, it seems that is not the case and it could be much, much, more serious…

The official statement from Twitch:

“As is our process, we take appropriate action when we have evidence that a streamer has acted in violation of our community guidelines or terms of service,” Twitch’s official statement says. “These apply to all streamers regardless of status or prominence in the community.”

this is gonna be something

This statement seems vague and rather uninformative, but you don’t have to look that deep into the social media platforms that support Dr. Disrect to get verification that this is far more serious than meets the eye.

A deleted Tweet from @ShannonZKiller apparently claimed to have some insight into the ban but was swiftly deleted after many called her out for “clout chasing”, which she allegedly agreed.

Hey, I totally get that it turns out ppl didn't want more confirmation that it is a permanent ban without the reason and felt the tweet was clout chasing, so I will respect those perspectives and delete the tweet.

Thanks for putting me in check!

I have to admit, at first I thought this was yet another victim revealing a popular streamer had abused them, but there is no confirmation of this at this time. However, this is not the first time Beahm has been caught in ethical and moral misconduct after the infidelity scandal he found himself in with multiple female streamers. This had previously lead to Beahm taking a break from the character and streaming to try and mend the relationship with his family.

Paul Tassi, a respected gaming journalist for Forbes quickly responded to @ShannonZKiller’s deleted tweet, suggesting that the details of her claims, which again were deleted, suggested that Beahm may have possibly even allegedly committed a potential federal crime: 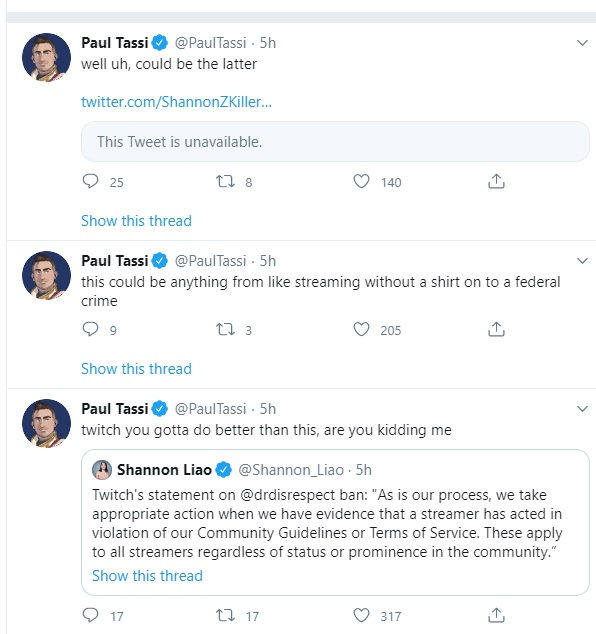 As of this writing, no details are currently known publicly to have confirmed what this means for Beahm and his Dr. Disrespect character, but from the look and sounds of it, it might be very, very, very serious. We just hope that maybe the issue is victimless, like tax fraud or something and not something worse. However, as Paul mentions above, it could most definitely be the latter…