Each and every single year we hear about this director that got snubbed, that movie that got snubbed, or those actors that got snubbed, and I am so tired of hearing about it. Just because someone didn’t win a category at the Oscars, doesn’t mean they were snubbed, and it isn’t newsworthy when someone loses. Honestly, this article isn’t even news, it’s just to tell everyone out there who uses the word “snubbed” to knock it off and get over it. 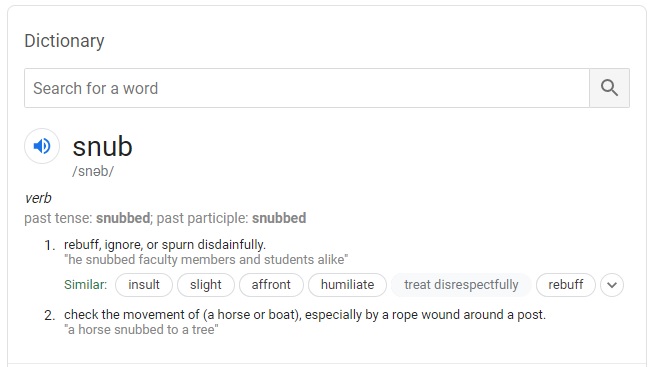 As you can see from the definition above, to snub someone or something is to ignore disdainfully. I don’t believe that anyone anywhere can honestly say that just because a movie didn’t get nominated or didn’t win an award was simply due to rejection with disdain or contempt. These are awards shows, and if you didn’t know this, almost every nominee has to pay a ton of money to campaign for a win, or even a nomination beforehand. The process is not just a bunch of white males out there reviewing every single movie that comes out in a year, marking off a tally on which ones meet a certain level of criteria based on whatever these men think makes a good movie. That would be absurd and honestly, impossible. Not only that, but some movies are better than others, even if it means one is slightly better or worse by a single tiny little factor. No matter what, a decision must be made and movies and cast and crew will not make the final cut.

I get that art is subjective, and as movies are art that too then means that they are subjective. But at the same time, can you really take a movie like Halle Berry’s 2004 film Catwoman or Ben Affleck’s 2003 film Gigi and say that they are good? No, right? They are bad, objectively. If we can do that, then we can certainly acknowledge that some movies are better than others. There is no way that anyone can say that the 2006 film The Departed or the 1972 film The Godfather are bad or not as good as The Emoji Movie, nor can you say that Gigli deserved more awards than LotR: The Return of the King. I think you understand that my point in this is that regardless of art being subjective, some movies are objectively awful while others are objectively great. And if we can say that, then we can also say that multiple movies in a single year are objectively great as well, such as all that were nominated for Academy Awards this year. But with only one winner and a limited amount of nominees, try to keep in mind that there will always be multiple losers, including those that don’t get acknowledged at the Oscars show. And also remember that doesn’t mean anyone was “snubbed”. It just means it didn’t make it to the final round of consideration, you know, like how most movies don’t.

I get that there are a lot of movies that were reviewed positively in 2019 that didn’t make it to the Oscars. But that is just how it goes. There are only so many nominees that will be able to wear their nominations like a badge of honor and slap it all over their BluRay packaging. But just because a movie didn’t get nominated, doesn’t mean it isn’t great, nor does it mean it isn’t deserving of some other award. And even if a great movie gets zero awards or nominations, that doesn’t mean it was snubbed by a bunch of old white men in the academy. There are just far too many factors to consider and sometimes a movie just doesn’t make the cut. And considering that so many movies will go unviewed, naturally some of our favorites among film, the cast and crew will not be mentioned. Unfortunately, we can’t always get what we want.

Yes, it can be frustrating when your favorite movie, actor, actress, or whomever of the year loses out to someone or something else. But that is how it goes sometimes, or even most of the time. And it isn’t a snub. Just because you liked or loved a movie, or even if a movie is hailed as being a great film for that year doesn’t make it to the nominations, that doesn’t mean it deserves to be nominated, let alone win, no matter how badly you want it to be the case.

So Uncut Gems didn’t get a nomination. Big deal. The movie may have been great, but so were every other nominee. Plus, we don’t know how much or how little the cast and or crew campaigned for this film among the academy. It wasn’t a snub. There is a process that films have to go through, no matter how good they are, and there are more films out there in the world than what we see at our local theater or streaming service in the United States. No one can see all of the movies that come out in a given year.

For whatever reason, the media in Hollywood so desperately wants to be angry at everything these days at anything they can- but not every actress, actor, director, movie, writer, or composer can be nominated, even if they campaign tirelessly. Just try to remember that they can be celebrated in other ways outside of an award show and that not every film can be considered as it is just not possible, no matter how good they are. However, I for one will not shed a single tear over Adam Sandler not being nominated for an Oscar.