Birds of Prey Disappoints at the Box Office, and Here is Why… (Opinion)

Birds of Prey didn't appeal to many, probably because not many asked for a Harley Quinn spin-off.

Birds of Prey (and the Fantabulous Emancipation of One Harley Quinn) is a mouthful, and personally I have not heard a single person on the planet refer to this film by its official name. Usually, I hear things like “the Harley Quinn movie” or simply “Birds of Prey”. And apparently Warner Bros feels like the name is largely responsible for the film’s poor opening box office performance.

Birds of Prey was expected to make $50 million on opening weekend, but instead barely scraped $33 million domestically. Globally, Birds of Prey only made just over $80 million against its $82-100 million budget.

According to reports, Warner Bros has officially changed the name to just “Harley Quinn: Birds of Prey”, possibly in an attempt to boost returns, as if audiences were not aware that the film focuses pretty much on Margot Robbie’s titular character while everyone else is just background dressing. And yet, we feel like that is more of the problem.

I personally did not see Birds of Prey, and there are a handful of reasons why, which I will get into in a moment. That said, I know that most of my comic book movie-loving friends opted not to see the movie for the same reasons I did, but for the people I know that did see it? They all said pretty much the same thing- “it was pretty good” or “it was okay” or “it was better than Suicide Squad”. No one said that the movie was bad, that it sucked, or really anything so negative that would make me avoid it. So why didn’t I see it? Because I don’t care.

Here’s the thing with DC movies lately; they have absolutely no idea who they are marketing their films to. To be more specific, Warner Bros and DC are trying to get everyone to see their movies, not just comic fans, and because of this, the movies come out sloppy, messy, and are met with poor reviews. To clarify, let me explain why I didn’t see it and why I feel very strongly that many are in the same boat as me.

Margot Robbie is a wonderful actress. From I, Tonya to Once Upon a Time in Hollywood… to even Suicide Squad, all of her performances are amazing. But I really don’t think that she has the star power to lead an action-based comic book blockbuster. But let’s say I am wrong on that, and let’s say that she is. Even still, Harley Quinn is not a character that is strong enough to lead a movie. And for some reason, Warner Bros thinks we don’t know that she is the lead? I mean, look at the marketing material. How could we not know? Take this poster for instance: 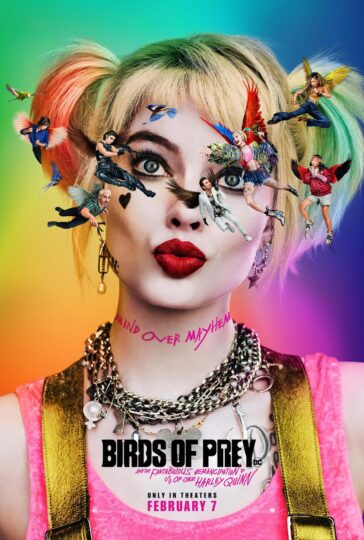 Warner Bros, we know that Harley Quinn is the feature. We know that Margot Robbie is playing Harley Quinn. But just because she was good in Suicide Squad, an otherwise garbage movie, she didn’t deserve a solo film. Sure, we praised her performance in Suicide Squad, but there literally weren’t any other redeeming qualities of that movie. Does that mean she deserves her own solo franchise? No, obviously, or you would at least think not. And did you ever think that because Suicide Squad sucked that maybe people didn’t want to see a spin-off/sort of sequel? Which brings me to my next point…

When James Gunn’s reboot of The Suicide Squad comes out, I will be there opening night. But until that happens, every other movie related to that failure of a movie from David Ayer will be ignored.

Birds of Prey features Margot Robbie as Harley Quinn. We got that much. So who else is in the movie? A handful of mostly unknown characters played by a handful of relatively unknown actresses. And before we get all the hate suggesting that people do not want to see an all-female cast, get over yourself. It has nothing to do with that. We don’t know these characters, we don’t know these actresses, and I didn’t care about the trailers, posters, or marketing material (or lack thereof) that showcased very little to intrigue me. Male or female, it doesn’t matter. I saw Suicide Squad because I was hoping for something good, not because it was most all-male. I just don’t find the cast nor the plot, whatever the hell it was, all that interesting. Which is why I wonder…

Yes, I could go see it to find out, but usually, marketing materials show you enough to intrigue you by feeding you enough of a coherent plot or story that makes you want to go see the movie. And as far as I could tell. Harley Quinn was just running around beating up people with some other lesser-known DC characters. That is not enough for me to want to see the movie. And considering that there were not any major heroes or villains in the movie (Black Mask is hardly a major villain, in my opinion), I could not care less about seeing it. I get it, you think that Ewan as Black Mask is a big deal and that I am considering them to be far less valuable than the cinematic treasure he is because he was Obi-Wan. But here’s the thing- if Black Mask was a super serious villain, he would’ve been saved for a Batman movie, not a Harley Quinn spin-off. I am sure that Ewan was great, but he isn’t the type of actor that guarantees me in a theater seat.

I am not a parent, so I don’t know how strict parents are on seeing R-rated movies these days, but as an adult, I know that I could have seen this movie without any issue. All my friends are 21+ so all of us could have seen the movie. But there was nothing to suggest that the film had violence or adult themes that would be befitting of an R-rated title. Did it hurt the movie? I don’t know for sure, but it certainly couldn’t help. All of the marketing material looked like a Lisa Frank folder from middle school, so I am sure it could have been shot and edited to fit a PG-13 rating. This is also the only DCEU film to be rated R (Joker isn’t a part of the DCEU as it is standalone among the “Elseworlds” line of films), but we don’t really see just why it needed to be in the trailers.

I guess my point with all of this is, who was this movie made for? Comic book fans? Female audiences? Action buffs? I just don’t really know, and considering what little marketing material there was, all of it seemed to appeal to high school teens, most of which couldn’t see the movie due to the R rating.

The movie did poorly not because of the name, which EW points out is not confirmed to have been changed due to low box office numbers, but because it was disjointed with a going-nowhere plot with no blockbuster heroes or villains. The movie received fair reviews which mostly just reiterates that it was just “okay” to those who saw it. No word of mouth is going to carry that far and reach more potential viewers with reviews like that.

If DC wants to make good movies with its Justice League heroes, then stick to that. Get good writers with a solid resume, do some solo films, make them fun and not dark and edgy, and market it well. Get the right actors, not just famous A-listers because you can, and tell stories that audiences want to see. Listen to viewers, listen to critics, and listen to fans. Stop sitting around your large mahogany tables in your 30-story tower boardrooms and having shrimp cocktails discussing characters you know nothing about. Because quite frankly, it feels like no one at Warner Bros. has ever picked up a comic book before in their life.