The Umbrella Academy is Predictable, Derivative, but a Whole Lot of Fun. Here is Our Season 1 Review

The Umbrella Academy probably won't surprise you much in terms of twists and plot direction, but it is still a fun, violent, and even heart-felt (at times) series that takes a look at a familiar genre through a slightly different lens.

Think Hit-Girl, meets the X-Men. This is what I originally thought where MCR’s Gerard Way was taking his comic ideals for a spin. There is some of that here, sure. But really, The Umbrella Academy has a mixed bag of plot devices that bring all that and more to the table in this 10-episode Netflix exclusive.

The first season of TUA is loosely based on the Dark Horse comic of the same name, but if you aren’t familiar with it (I wasn’t on Saturday, but became obsessed by Sunday night), then it doesn’t really matter. The show should still please you. And at first, I was very skeptical considering that Gerard Way and his music isn’t exactly my cup of tea, nor was I prepared to be interested in yet another medium of superhero stories what with the onslaught of media we get daily on the genre. But, despite the fact that the entertainment industry is convoluted and overwhelmed with heroes and vigilante projects, The Umbrella Academy is still super fun, and I can’t wait for season 2.

If what I am telling you is not enough to convince you, I don’t blame you. You don’t know me and it’s silly to think the lead singer for My Chemical Romance could write a comic book story so good that Netflix optioned to make it into a series. And even then, Netflix isn’t exactly filled to the brim with positive reviews of its own original content. But I assure you, TUA is fun. And there is plenty here to enjoy if you are a fan of kids in masks kicking the shit out of bad guys and ripping people a part (no. 6 is so cool). But I am getting ahead of myself, as there is a lot more to the show than that (considering the first season largely focuses on a plot that takes place when the kids have grown up). Let us talk about the characters and why they are worth the investment of your time.

In October 1989, 43 women around the world gave birth, all having not been pregnant when the day first began. An eccentric billionaire by the name of Reginald Hargreeves takes it upon himself to adopt as many of them as he could. Obtaining seven, he reveals to the world that they each of a set of unique supernatural abilities. He trains them to become heroes and the kids basically become super stars until they grow through adolescence and realize that their adoptive father used them like tools rather than showing them any love or compassion. It is also worth noting that the show takes place in an alternate reality to ours, with few subtle differences (fashion is still very similar, but technology went in a different directly such as no one seemingly owning or using a cell phone, for instance).

The story picks up in present day, where the ‘academy kids’ have all grown up, jaded, cold, and distant from one another. Only when their adoptive father is dead, are the seven reunited at the academy where they endured grueling training. They deduce that their father dying has suspicious circumstances, only to come to a much larger realization that an apocalypse is happening in about a week and they need to do all they can to stop it. Any more than that will have spoilers. So you will just have to watch for yourself to get there. But, let us meet the core group of kids and their powers. 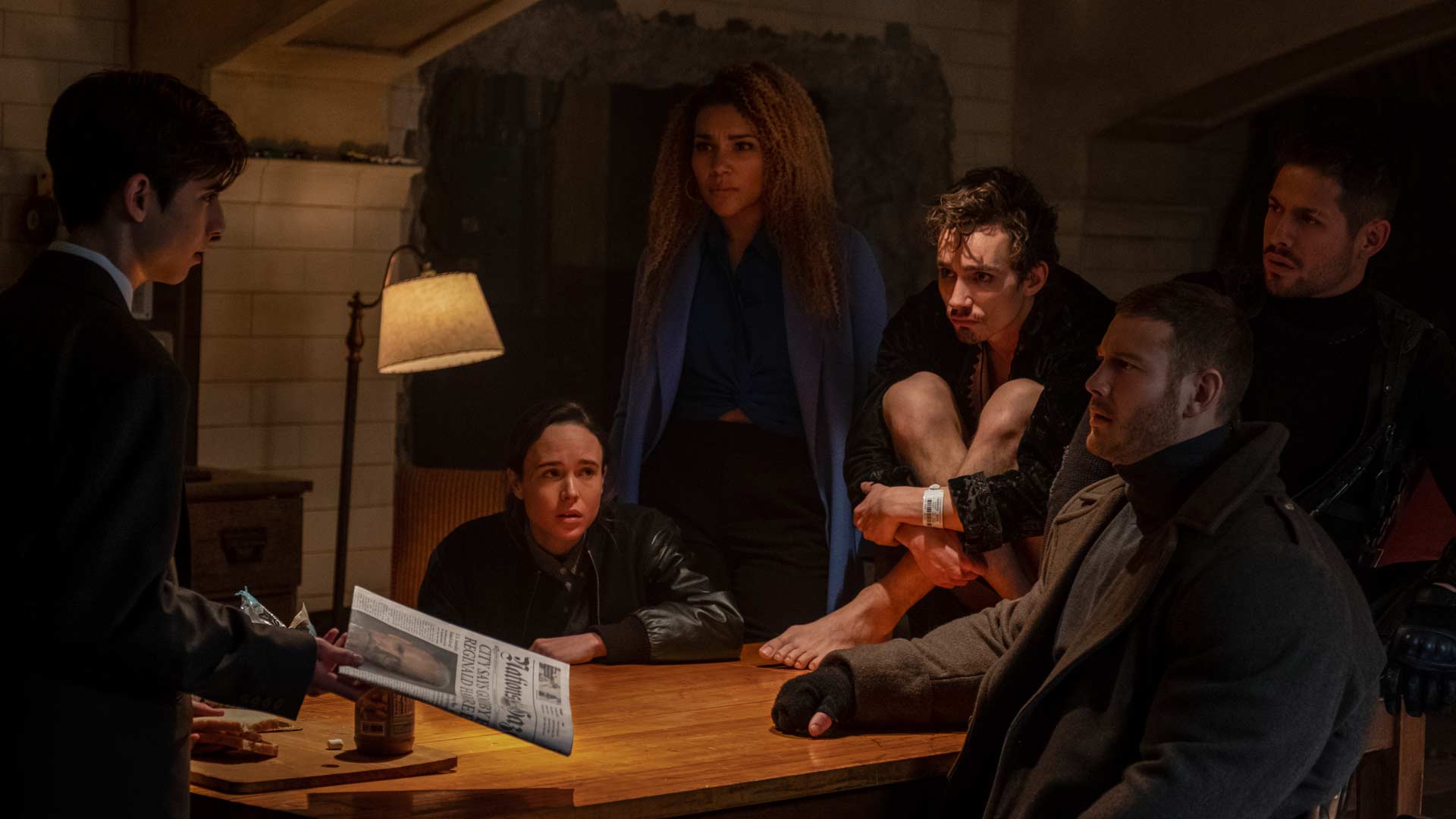 The worst thing about the show, is that if you have seen any other super hero story, in a comic or a movie, than you will likely be able to call how each episode plays out, scene by scene, from one moment to the next. Without question, TUA is the most predictable show I have ever seen. Yet, I still find myself so thrilled with the first season (not that it will win any awards or anything), that I would call myself a fan from the first episode. I will pick up the graphic novel, and research developments on the series as it absolutely has to get a second season. So, for whatever reason, I love this show. It is fun, emotionally grueling, often funny (largely due in part by the antics of Aidan Gallagher (no.5) and Robert Sheehan (no. 4 ‘Klaus’)). These two steal the show while the other cast mates round out the rest of the roles to fill in any gaps required to make the rest of the series feel complete.

Surprisingly, the production value on this series is much better than I would have thought. Netflix is not exactly known for quality original content by many critics, but this is one show that stands out. If you have no seen it, it is worth subscribing to Netflix for. No, this is not a sponsored advertisement. I simply enjoyed it that much. Besides, there’s other stuff on Netflix too. And it’s pretty cheap. So like, don’t get on my case about it. Anyway, with a few shortcomings here and there, TUA is still worth your time. Especially if you like comic book heroes.