Ratchet & Clank: Rift Apart is the first full-length, all-new Ratchet & Clank game in over 11 years. While the games filling that gap were good (I really like Into the Nexus and Ratchet & Clank PS4), Insomniac Games has finally crafted a new large-scale title in the long-running series — and it delivers. Rift Apart is a heartfelt, energized return for one of PlayStation’s greatest duos, and it’s the most compelling reason to hunt down a PS5 yet.

Years after the Future series, an event celebrating the heroics of Ratchet and Clank is rattled when Dr. Nefarious steals the Dimensionator and enters a dimension where the fan-favorite villain always wins. The result is Ratchet and Clank separated in this dystopian dimension and encountering a mysterious female Lombax named Rivet. Fighting for the same cause, our new and old heroes must find a way to reunite, return to their home dimension and stop Nefarious from total dimensional conquest.

Like A Crack in Time, Rift Apart sets aside gags (the game is still very funny) for more character-based storytelling and plot momentum. The big difference in Rift Apart though is Rivet. She’s a breath of fresh air and exactly what the series needed to help build out the anxieties and quirks of our main duo, and ultimately help them grow. Rivet has her own arc and lively personality that adds incredible energy to the game and series as a whole. (Also Insomniac did an incredible job at not spoiling the reveal of a couple of pivotal characters who are also great, and I won’t spoil them here.)

Will I understand the story of Rift Apart if it’s my first Ratchet Game?

If you have no idea who Dr. Nefarious is or what the Dimensionator is, it’s ok. You’ll be able to follow the story of Rift Apart no problem. The prologue does a good job of introducing the main characters and key events/devices from past games (the four PS3 Future games specifically), so you’ll know everything you need to.

If you’re even just a little familiar with Ratchet & Clank games, then you know weapons are a huge part of this third-person shooter-platformer series. Rift Apart has a great blend of classic weapons (shoutout Warmonger and Agents of Doom) and new ones. All weapons benefit from the PS5 Dualsense controller’s haptic feedback. Pulling the trigger halfway or all the way can mean different effects or features, and from pushback to tiny vibrations in your hand, it the best showcase of the controller yet.

Sniper rifles in Ratchet games are usually cumbersome to use, but the Headhunter in Rift Apart is a revelation. Using the L2 trigger, pulling down halfway lets you use the scope —but pulling down all the way lets you slow down time, making lining up headshots outrageously satisfying. I yelled out loud the first time I did this, it feels so good. 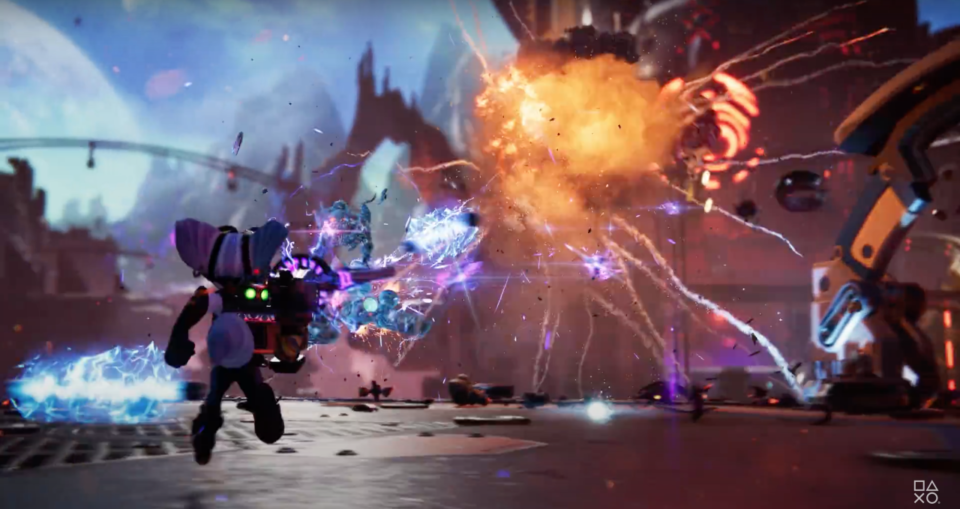 Besides gunplay, the key new gameplay feature are rifts to other dimensions scattered throughout each explorable planet. They can drastically change where you’re fighting (in scripted but impressive setpieces) or let you teleport to more tactical spots. Related to this are the traversal mechanics, including an invincibility dodge and wall running straight out of Titanfall 2 (come to think of it there’s a lot of Titanfall 2 influence here). These new mechanics, paired with a souped-up version of the hoover boots from A Crack in Time, make gliding around maps a more fluid and fun experience.

Nearly every mainline Ratchet game has gadget puzzles to break up the gunplay and brain-bending sequences where you play as Clank. The gadget puzzles in Rift Apart are replaced by tanky shooter sequences where you play as a computer program named Glitch. While Glitch is cute and easy to root for, these puzzles are just ok diversions. The Clank sequences though combine the time-manipulating puzzles from A Crank in Time with Lemmings, and while a little repetitive towards the end, they’re pretty great.

Every mainline Ratchet & Clank game since the PS3 has been a visual showcase of what the console they debut on is capable of, and Rift Apart is no fucking exception. At this point comparing a game in this series to a Pixar movie is trite, so I’m going to compare it to Ratchet & Clank 2016, a game that still looks amazing: Rift Apart makes it look old. From each planet bursting with diverse color palettes to more lived-in towns and cities with aliens roaming about, Rift Apart once again raises the bar. Uncharted-esque setpieces add an extra flair to many planets, the highlight being a grind rail chase on a giant mech. 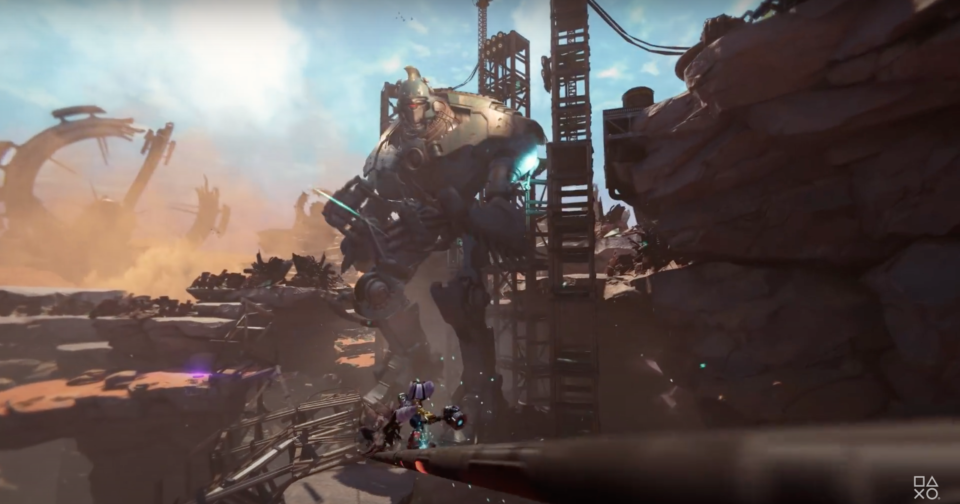 I don’t usually write about a game’s trophy list because a lot of people may not care, but Rift Apart notably has a very simple and easy list to complete. To get the platinum you won’t have to upgrade each weapon to max level, find all the gold bolts, or complete all the arena challenges. Just complete the main story, do the side quests, find some collectibles, and platinum ding. While it may please some, I would have actually preferred a more robust list. It’s the first big Ratchet game in years and extra rewards for putting in the time to do all that (I did all that) would have icing on the cake. A patched-in separate trophy list for these more challenging endeavors is an easy fix though.

How long is Rift Apart?

You can complete the story in around 11 hours. Completing everything mentioned above and platinum-ing the game took me about 18 hours.

In the time since I played A Crack in Time (a game I’ve brought up a lot in this review because I’m trying to will a PS5 remaster into existence), I was worried the Ratchet & Clank series was over. I thought smaller entries or remakes were the future as Insomniac moved onto other games like Spider-Man.

I am so glad I was wrong.

Ratchet & Clank: Rift Apart is a substantial, heartwarming, and beautiful entry in the series. Next to Astro’s Playroom, this is an essential PS5 game everyone can enjoy. It’s the latest and greatest in a series that’s given me a lot over the years, and I’m beyond thrilled it’s not going anywhere.

Full Schedule
<p style="text-align: justify;">Ratchet & Clank: Rift Apart is a substantial, heartwarming, and beautiful entry in the series. Next to Astro’s Playroom, this is an essential PS5 game everyone can enjoy. It’s the latest and greatest in a series that’s given me a lot over the years, and I’m beyond thrilled it’s not going anywhere. <p> <p style="text-align: justify;">Heartfelt and a blast to play, Ratchet & Clank: Rift Apart is proof this long-running series is still fresh and better than ever.</p>Ratchet & Clank Rift Apart Review: A Long-Awaited and Essential PS5 Title