Kingdom Hearts 3 Review: A Satisfying and Heartfelt Finale (for now)

(Say it with me) May your heart be your guiding key.

Except it really isn’t.

It’s finally here, sure, but in no way is it the third Kingdom Hearts game. There’s been seven Kingdom Hearts spinoff titles outside of the numbered games, each one contributing to the overall (and overly complicated) narrative the series has spun since first releasing in 2002. And if you’re like me, you’ve played/endured each of these titles in an attempt to keep up with Sora and everyone connected to his heart.

So Kingdom Hearts 3 isn’t really the third entry, but it is the culmination of the series and story so far. This begs the question though, is it a rewarding ending for longtime fans? Can new players still have a fun time?

The answer, straight from the heart, is yes. Without a doubt yes.

Half-Pints, Replicas, and a Whole Lot of Tears

Picking up immediately after the events of 0.2, Sora, Donald and Goofy must once again travel the cosmos, meeting numerous Disney characters along the way, this time to help regain the strength Sora lost at the end of Dream Drop Distance. Sora must also master “the power of waking,” a skill that will aid in finding lost allies as the final confrontation between the seven Guardians of Light and Master Xehanort’s 13 Darknesses draws near.

If none of that made any sense to you, I’m sorry, but Kingdom Hearts 3 is not afraid to immediately get into the murky weeds and infamous complexities the series is known for. It does not take long before replicas, the Black Box, or “the hurt” felt by Data Sora (bear with me) is referenced.

This doesn’t mean KH3 is inaccessible to newcomers or those who haven’t played the spinoffs. The game does an admirable job of catching the player up with expository cutscenes or Gummiphone entries (the new Jiminy’s Journal) explaining what in the worlds is going on.

For longtime fans though, this really is the culmination of everything in the series so far (for the most part, I’m looking at you, Kingdom Hearts Union χ[Cross]). Without spoilers, prepare for long-standing questions to be answered, intriguing reveals, and more than a few reunions that will make you well up.

Like previous entries, most of the story is told through cutscenes, but they are noticeably more dynamic here. Smooth camerawork and lively dialogue give KH3 an earned cinematic feeling, and greatly cuts down on the awkward exchanges of past games.

KH3 retains the Command Menu system of KH1 and KH2, while integrating new mechanics from 0.2. This includes the Focus Gauge for the first-person Shotlock attack, and the very satisfying fluid magic (seriously, casting the thunder spell is a blast).

A brand new mechanic is Keyblade transformations, where after completing a combo you have the option to activate a new Keyblade form that gives you completely different attacks (a fusion of the Reaction Commands and Drive Forms from KH2). For example, the Keyblade you get from the Tangled world changes into a staff that enhances magic and leaves a trail of Sora clones where you attack. 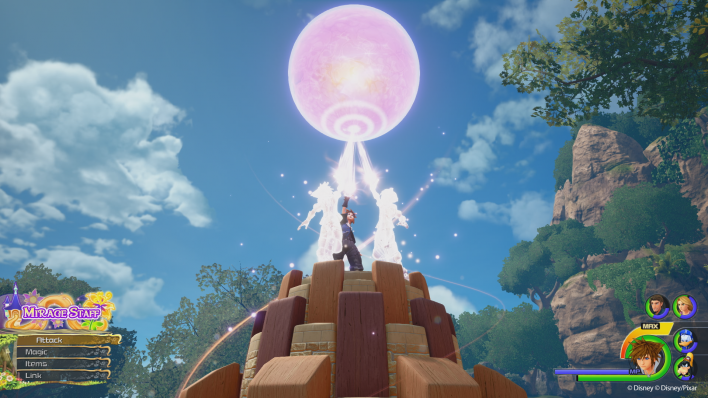 Attractions are new too, where Sora and the gang hop on a Disney theme park inspired ride for a brief series of attacks. These are neat, but as you level up chances are you’ll avoid them due to the amount of time that they soak up (but the Buzz Lightyear Astro Blasters one rules).

Overall, expect to be stringing together combos and bouncing around the worlds with the most refined combat the series has seen since KH2 Final Mix, mostly because it just feels really good.

KH3 is not a difficult game. Some of the final bosses can be challenging, but if you’re a veteran to the series you won’t have a hard time. There’s thankfully no frustratingly broken bosses like in Birth by Sleep or annoying confrontations like Xaldin in KH2, but the sheer variety of options you have for a fight (especially factoring in the different ways you can heal yourself) makes KH3 a pretty breezy experience. Play the hardest difficulty, Proud Mode, or hope a Critical Mode is coming in an update.

The Disney worlds you visit in KH3 are some of the best in the series. This is mainly because each world is brought to life with gigantic playable areas and incredible attention to detail.

Toy Box, the world based on Toy Story, is the best case study. I lost track of time exploring every nook and cranny of Andy’s Room as toy-sized Sora. Looking at each book on shelf and the crazy amount of intricate texture detail for each toy, like party members Woody and Buzz, was a smile-inducing time sink, but that’s only the beginning. The world soon expands into a massive three-story toy store to explore, complete with toy mechs you can pilot.

Then there’s the Tangled world, where you can interact with Rapunzel and show her the wonders of the outside world, adventuring through gorgeous, lively forests. Or the Pirates of the Caribbean world where you command your own ship and sail around exploring a ridiculous number of  islands (by the way, the game admirably tries to condense and retell the events of At World’s End, it’s hilariously amazing).

The crazy amount of detail and sheer size of each area make each world feel massive, and just a blast to play in. The worlds are toy boxes for Disney fans to dig through, and what you find inside will definitely make you feel like a kid again.

There’s plenty else that KH3 nails. I haven’t said much about the music because it’s no surprise that series composer Yoko Shimomura once again knocks it out of the park with stellar new tracks (I love the Tangled world’s music) and hype remixes, like the triumphant version of “The Other Promise.”

Perhaps my favorite feature KH3 introduces is the Gummiphone’s camera, and specifically, Lucky Emblems. These are basically Hidden Mickeys cleverly scattered in each world, and finding/taking a picture with them make for most the compelling collectible the series has ever had.

Kingdom Hearts 3 is loaded with enough story content and side quests to keep you engaged for 50-60 hours (the trophy list and platinum aren’t too bad either). However, there are some staples of the series that are nowhere to be found in KH3. The most obvious example of this is Final Fantasy characters. Only Moogles appear for selling items, and that’s it. No Cloud, Squall, Sephiroth boss fight, etc. It’s a bummer, and not giving these characters closure or a fitting sendoff is sorely missed.

Two worlds in particular, Twilight Town and 100 Acre Wood are also lacking compared to KH2. 100 Acre Wood is just one small area where you play the same minigame three times and notable characters don’t appear (where’s Eeyore?). It too is a bummer, and you can’t help but feel like these worlds were afterthoughts or just weren’t given the dev time they needed.

The End (for now)

KH3 isn’t the end of Kingdom Hearts. The epilogue and secret movie (maybe the greatest and most Tetsuya Nomura thing ever) make this clear, but for now, Kingdom Hearts 3 is the conclusion fans have been waiting for, and it delivers. Sincere resolution from the story, buttery gameplay, and a scope unmatched by many contemporary titles make this a meaningful and joyful experience, whether a new or returning fan.

If you’ve been patiently waiting, I can confirm that Kingdom Hearts 3 is worth the wait.

Kingdom Hearts 3 is available now for PS4 and Xbox One.