Quiplash returns in the latest from Jackbox Games.

The Jackbox Party Pack series is a modern party game staple. The tried and true formula of releasing five different games in a “party pack” collection that you play by using a web-enabled device like a phone or tablet continues with the latest entry. In a sleek presentation with each game represented as giant parade balloons, Party Pack 7 combines an updated classic with four new games.

Below are mini reviews for each party game and screenshots from a recent session of Party Pack 7 with five of my friends.

The “say-anything party game” returns to Jackbox again, again. In Quiplash, you face off against an opponent and answer prompts. The audience/other players then decides which answer is best and that player earns points. If you’ve played Quiplash before you’ll know what you’re getting yourself into, but this time around there’s a key new feature: Thriplash. This is a new final round where each player gets a prompt that requires three responses. It’s not a huge change, but it led to the most creative and funniest answers I’ve seen yet. 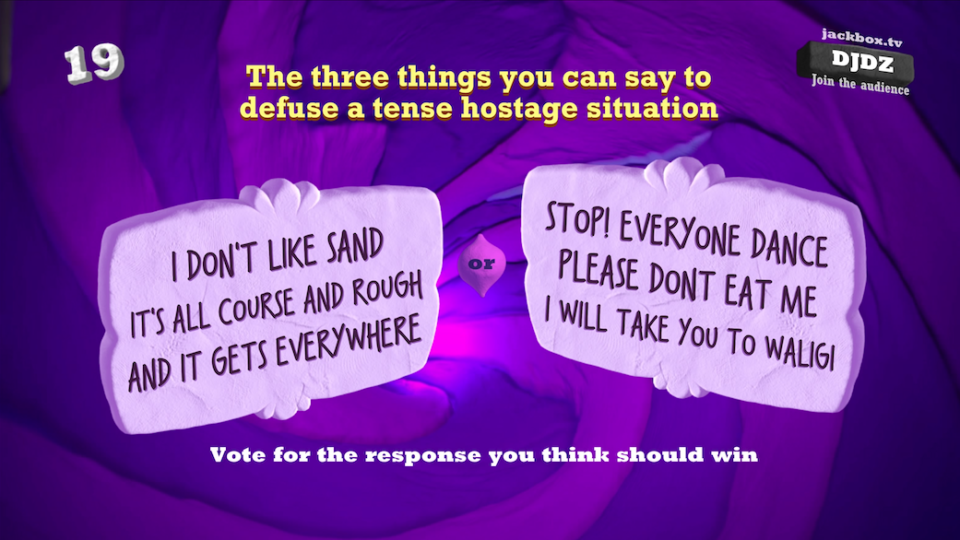 The addition of Thriplash makes Quiplash 3 the best iteration of the game yet, and easily one of the highlights of the collection. A classic and must-play.

The Devils and the Details

In this game, you take on the role of devils imitating an average suburban family who must perform the mundane tasks of everyday human life. That includes driving to work, ordering pizza, or finding the remote, all by playing Wario Ware-esque minigames. The gimmick here is that you can work together to complete your tasks faster, or you can take on selfish tasks on your own to score individual points. 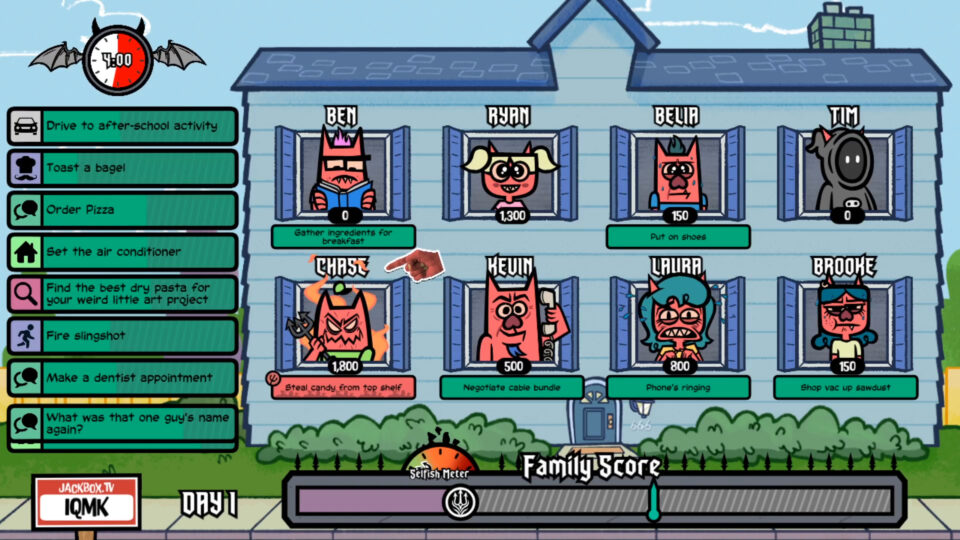 This is one of the most involved/high-concept Jackbox games yet, which isn’t a bad thing. The problem is if you’re streaming the game or playing remotely (like I was), it’s hard to collaborate with another player, especially if six of you are sharing the same voice chat. If you have roommates or a local crew and you want a game you can keep grinding at, definitively give this one a try.

In Champ’d Up you are tasked with drawing two fighters who will then duke it out in title matches. The fights are themed, and during the match, players vote to determine which fighter is the best contender. In the second match, you have the option of swapping your current fighter out with your previous fighter if you think they’re a better fit for the rumble. 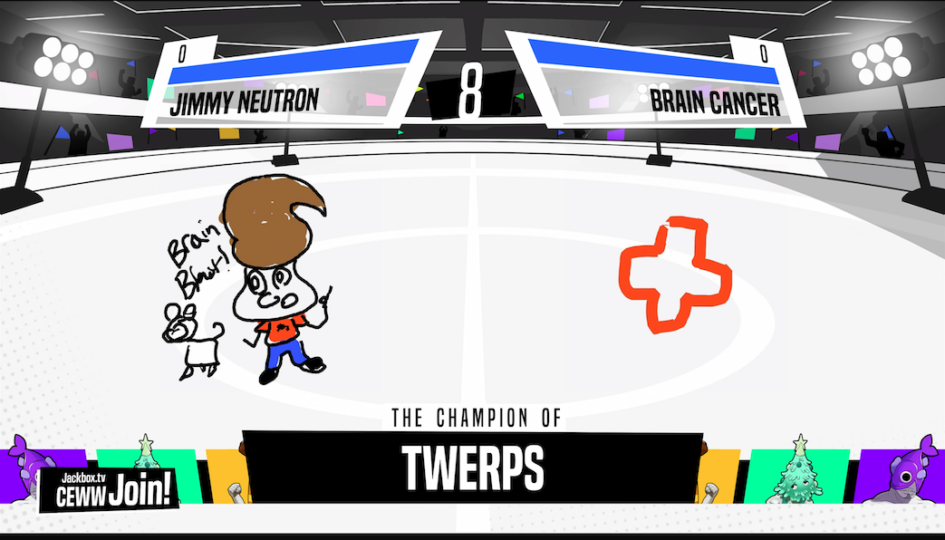 This is easily one of the best drawing-based Jackbox games. Creating and naming your fighter is a blast, but the game becomes a hype fest once you’re able to tag in your other fighters, leading to unpredictable matchups and some of the best laughs I had with this pack. Definitely play this one.

In this game, you must give a short presentation using a combination of text and image-based slides. If you’re given a text slide, just read what’s there, but if you’re given an image, you have to find a way to tie that into your presentation topic. The best part: you have an assistant you’re at the mercy to who is choosing what images show up in your presentation. Once everyone has presented, you’ll see the feedback the audience has given you and you’ll hand out made-up awards to your fellow presenters. 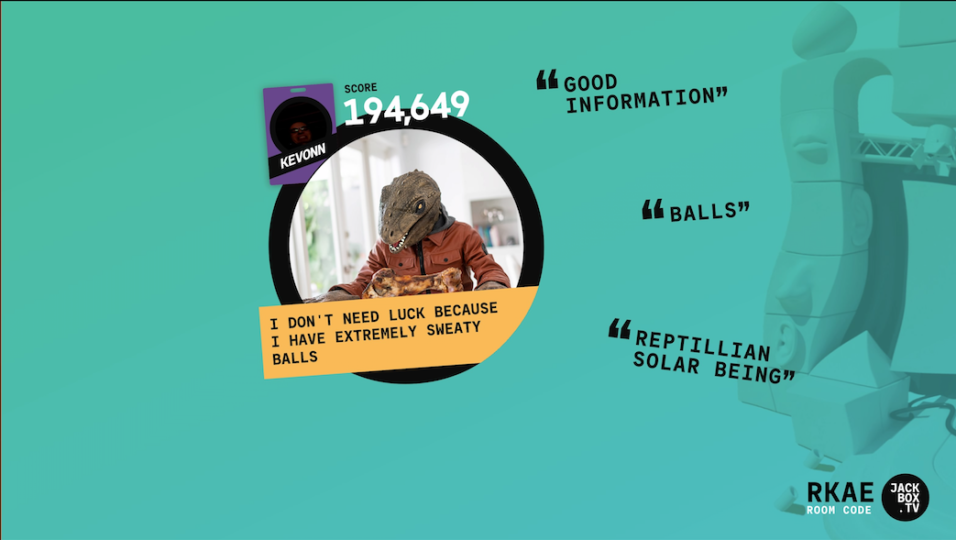 Presenting can be stressful and will require quick thinking, but playing as the assistant and slyly sabotaging or elevating someone else’s presentation is an absolute blast. The engagement mechanic for players watching the presentations unfold is kind of unnecessary, especially with the awards at the end, but overall this one is a lot of fun. (Plus you can use a picture of yourself in the presenter portrait.)

Blather Round is a pop culture guessing game where players first select a prompt (a famous person, place, or thing). Players then take turns presenting by choosing from a predetermined list of phrases to describe the prompt without actually saying it. The other players must then write in to guess what they think the prompt is. 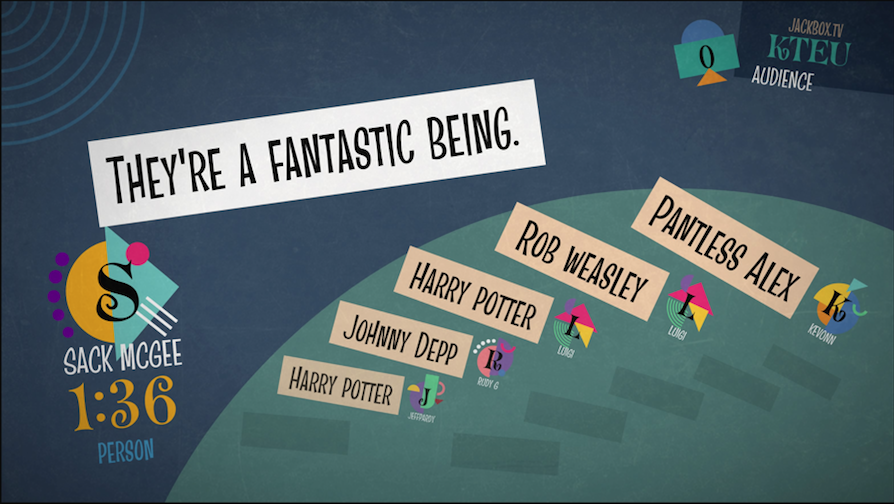 Initially, this game may seem too vague and challenging, but the key is for the other players to keep guessing. More guesses mean more options the presenter has for the phrases they choose, so sometimes you’ll be able to guess the word right away. Other times, if you don’t choose the right phrases or the other players have bad guesses, it will take a while. Overall I would have preferred if there was more of a trivia aspect to this game, but it’s still a nice mix-up from the other games and worth a try.

Jackbox Party Pack 7 is a solid party game collection. The new games have the best variety in a pack yet, and each game is worth trying. You’ll prefer some new games to others, and amongst my friends, we had the most fun with Champ’d Up and Talking Points.

Quiplash is a Jackbox classic, and the new version is of course a standout. If you’re in quarantine or feeling isolated, Quiplash 3 has the uncanny ability to make you better, more connected, and hopefully crying from laughter. Combine it with a new game like Champ’d Up, and you’re in for a great time.

Full Schedule
<p style="text-align: justify;">Quiplash is a Jackbox classic, and the new version is of course a standout. If you're in quarantine or feeling isolated, Quiplash 3 has the uncanny ability to make you better, more connected, and hopefully crying from laughter. Combine it with a new game like Champ'd Up, and you're in for a great time.</p>Jackbox Party Pack 7 Review: A Solid Party Game Collection Perfect for 2020