Doom Eternal has incredible lore and story aspects but gameplay eventually gets boring.

Developer id Software upped the ante in every conceivable way with Doom Eternal and its two follow DLCs (The Ancient Gods Part One and Part Two). What I found most interesting about other reviews, while I worked on writing my own, was that what others found to be lacking in the game, I loved the most. I feel so strongly that its storytelling is Doom Eternal‘s strongest point, and the gameplay aspect, while fluid and fun, was fairly overly repetitive.

I hesitated on writing an early review of Doom Eternal partially because I was feeling rather lazy but also because I wanted to see how the DLCs wrapped things up and how much had changed. I could have written separate reviews for each but I really wanted to do one for all three. And while I do not have anything really negative to say about the game’s campaigns, I did find myself feeling mind-numbingly bored at times. And to that, I feel I am in the minority as the story and lore is what I found most interesting and where the majority of my gameplay investment was motivated. 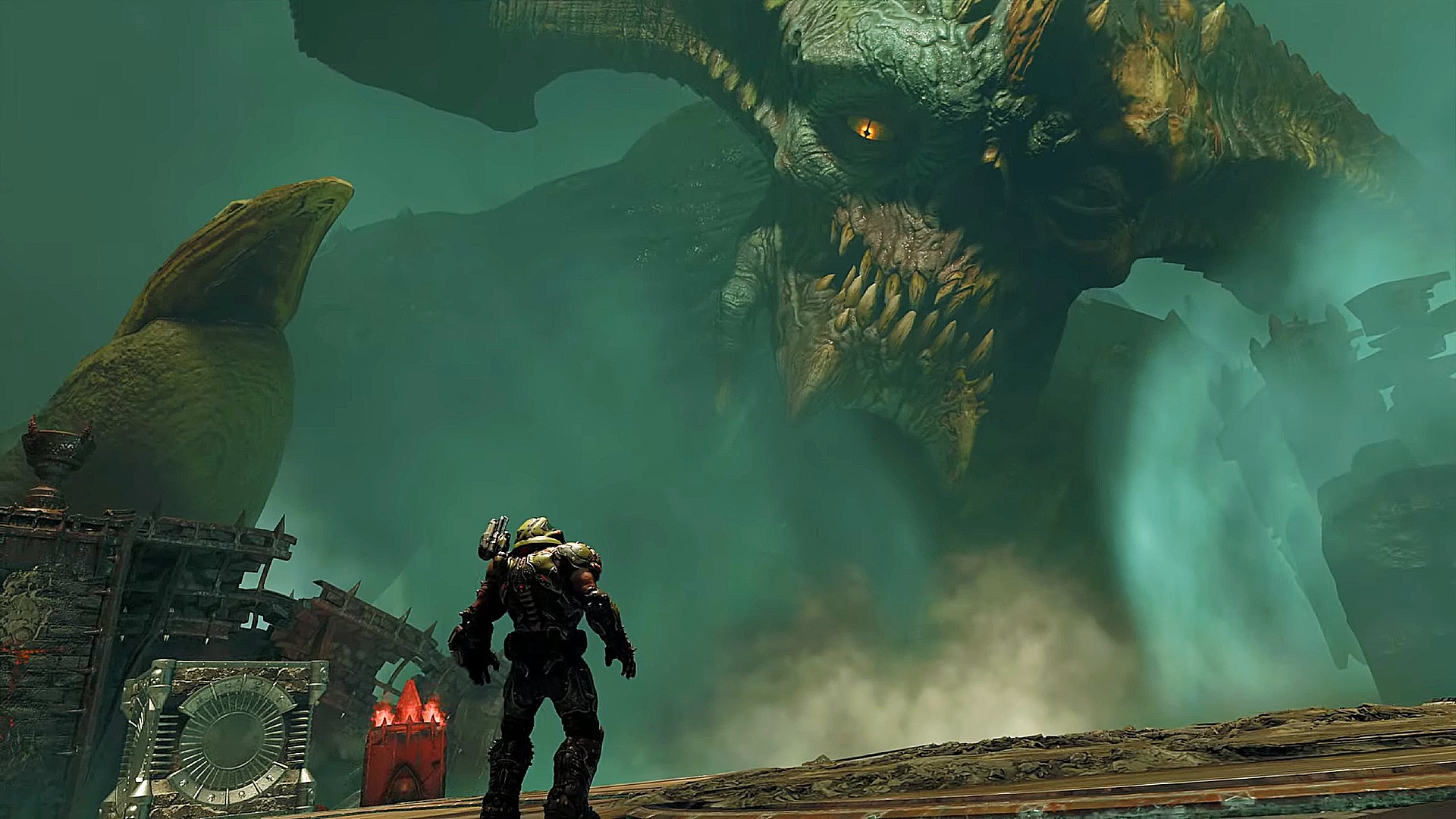 Doom Eternal follows Doom (2016), a game I felt had brought some major innovation to the franchise through story and gameplay, but is bigger and better in every manner a game can be measured. The bosses and enemies are more varied and frequent and are bigger and badder in every way and provide a unique challenge in all difficulty levels.

The story here continues to follow the Slayer as he pursues the Maykr’s with extreme prejudice as he slaughters their armies and attempts to stop their takeover of earth. Both The Ancient Gods DLCs continue Doomslayer’s mission as he faces the source of it all, Davoth, The Dark Lord, and architect of all suffering, among other things.

The lore and the story are the best part of Doom Eternal as they are filled with incredible thought and detail that expand on the beginning of all things and fill in any and all story gaps. I loved this. Throughout each level are pages that contain the history of Doom as a franchise. The pages explained and answered many questions I had that carried over from earlier games in the series. However, I can’t help but wonder what the future could look like for Doom as a franchise considering how things ended in The Ancient Gods Part Two. 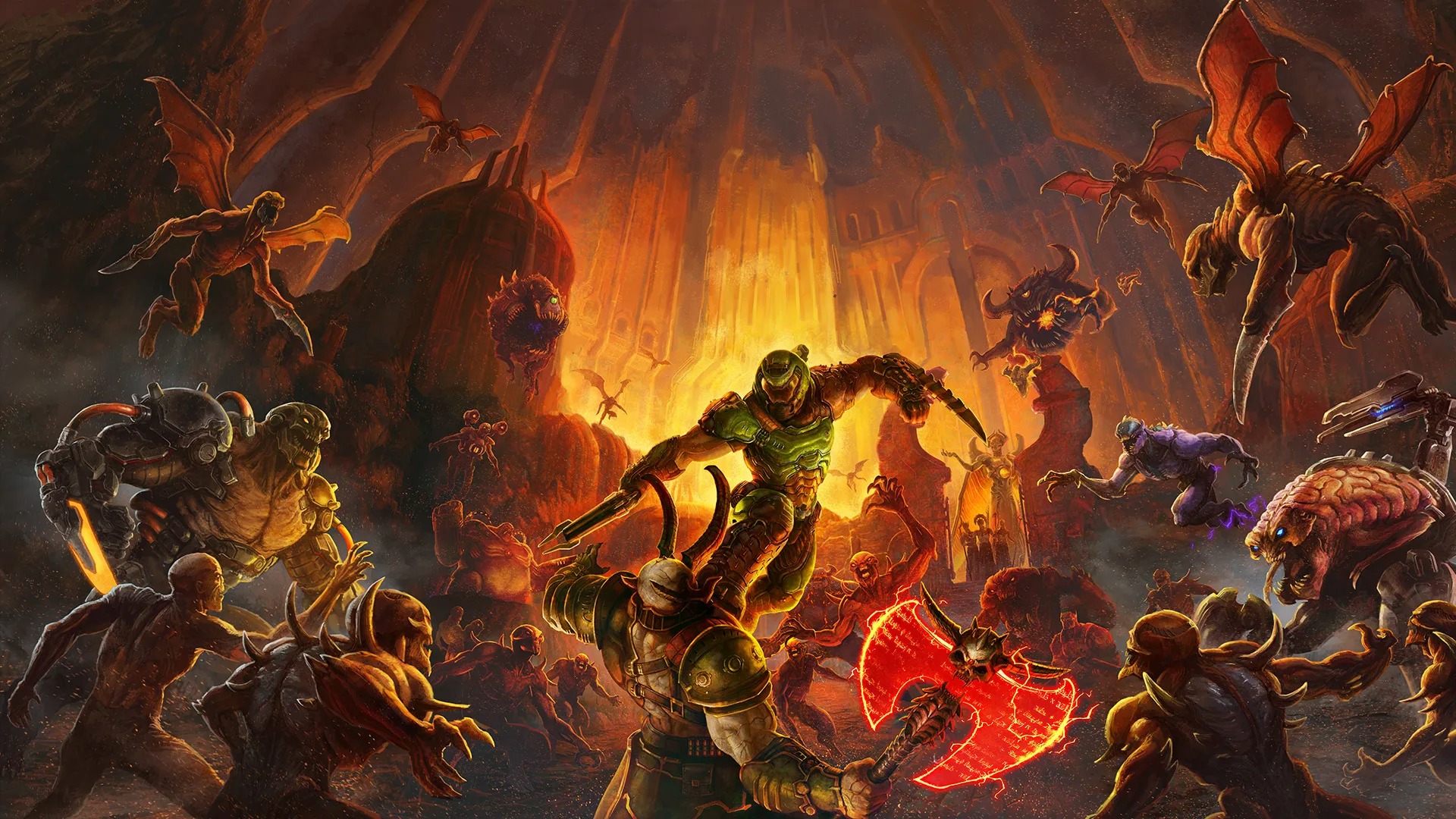 Eternal‘s campaign is filled with everything you have come to love about Doom but adds more, a lot more, of it. Violence, blood, and an incredible sense of dominance accompany the Slayer as he utterly annihilates the forces of Hell with his arsenal of weapons. At first, I was overwhelmed with the variety of tools at his disposal and how many different ways you could kill the demons. Freeze them, torch them, or blast them in the face with a shotgun, the possibilities are plenty. Or so I thought.

Now, I know that I am in the minority here but eventually, I got bored. Between relying too much on the shotguns and dash abilities, there were a handful of guns I rarely used unless I ran out of ammo. And that is something that is by design. The game gives the player occasional upgrades that increase ammo capacity but eventually, you run out, as the Slayer is constantly faced with multiple waves of enemies that will deplete that rather quickly. Even with the chainsaw, which also regenerates a single use and provides ammunition, you will be running out of bullets faster than you realize.

While it’s nice that the Eternal‘s weapons are strong and capable of mowing down most enemies, you will obviously lean into the Super Shotgun and its chain ability the most, both for damage as well as movement. The issue is that once you find the sweet spot in your attack rhythm, you won’t want to stray too far from that and then the game starts to feel repetitious.

The platforming and wall-climbing do little to break away from the monotony that will eventually settle in as you mow down wave after wave of enemies that die at the hand of the Super Shotgun, or need to have a shield depleted from the Plasma Gun. Those two weapons will undoubtedly lead the front of your attack styles, in most cases. And while the levels themselves look beautiful, you are rather restricted in terms of how far you can explore. 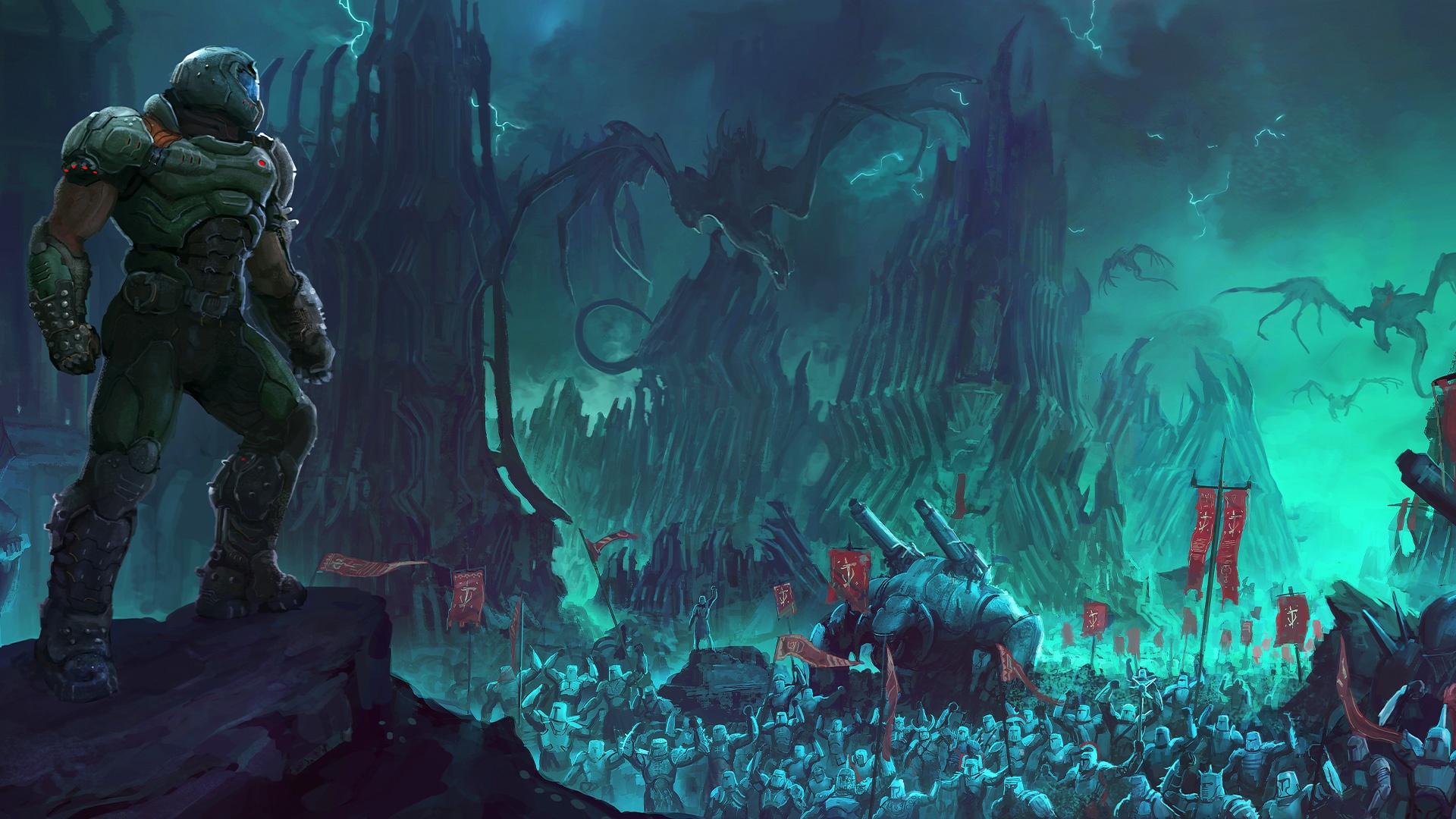 The levels in Doom Eternal all look incredible but you can only really go forward with the only straying off the path coming in the form of the occasional secret. But even then, there isn’t much to do other than obtaining yet another collectible. This remains true through Doom Eternal‘s base campaign and its two DLCs, even though the latter has far less available.

The collectibles are also a nice touch but I was immediately bothered by how they were almost immediately all visible on the map making them far too easy to locate and retrieve. In most cases, you will see the secret passages just by moving forward as they are almost always marked by a glowing green crack in the wall which can then be punched down, revealing the secret on the other side.

Collectibles are a nice touch, I just wish that “secrets” were a bit more, you know, secret. You can’t really refer to something as hidden when it shows up on your map, big and bold and easily discovered just by casually moving forward through the level. 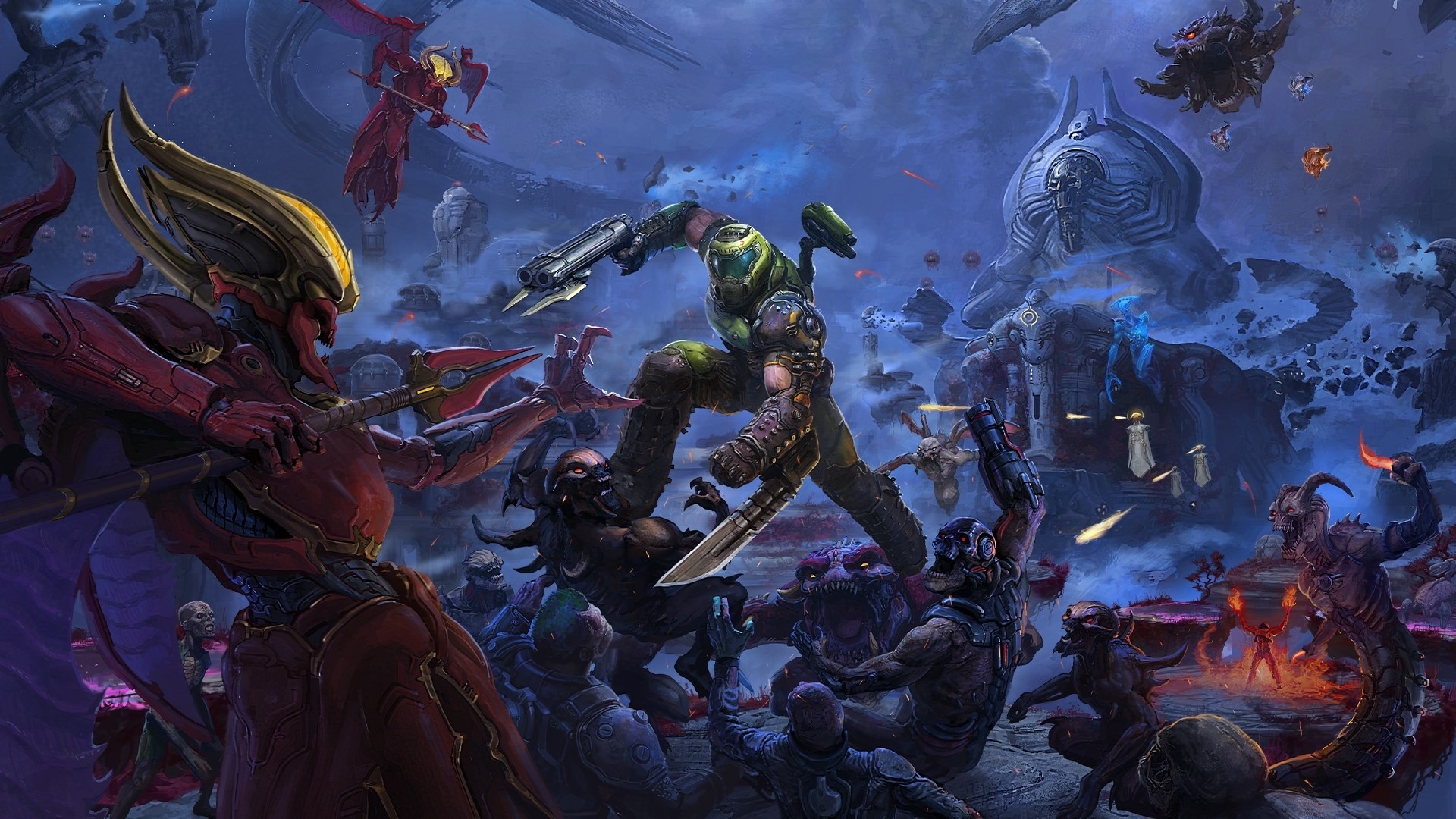 The campaigns for both the base game and the DLC add a lot in terms of lore and story, whether it be through hidden history pages scattered around or those that are right in front of you and hard to miss. Reading excerpts and passages that expand on the universe and make great strides to address story elements from past games that may have been needing further elaboration.

While I can’t praise the story and lore enough, I equally felt bored and drained by repetition through level platforming and combat. Halfway through the base campaign, I was only motivated to complete Doom Eternal for the story and The Ancient Gods was more of the same of both- great story/lore building and repetitious combat with the gratuitous gore you come to expect from the franchise.

The soundtrack was solid throughout the entirety of the playthrough. Great rock music added to the action and perfectly accented the violence and destruction brought on to the forces of Hell. There really isn’t much more to say here.

Doom Eternal‘s levels are beautifully designed and the skyboxes (distant places the player can’t reach) are often filled with giant demons stomping through the world or structures that will leave you in awe. Throughout my playthrough, I stopped several times just to rotate 360 degrees and take in all that stood before me, often towering over my path.

The Ancient Gods DLC also introduced new areas not seen in the base campaign that was equally impressive. I was disappointed with how little freedom I had in exploring as I was contained to a pretty specific path with the only option of moving forward but everything that surrounded me during my progression impressed me.

Doom Eternal and The Ancient Gods Part One and Two are worth full price for fans but maybe wait for a discount if you aren’t entirely sold or hugely invested in the franchise. The game’s visual design and story structure are the best things going for it but the combat is exciting and fun, even if it gets old eventually. I often found myself mostly engrossed in combat during optional timed encounters or after unlocking a Slayer Gate, hidden areas that are filled with optional powerful enemies that provide a real challenge.

Doom Eternal is fun and definitely worth your time but don’t expect too much in terms of innovative gameplay, despite a handful of improvements and new additions over Doom (2016). Still, I can’t help but wonder what direction the future has for the franchise considering that the story wrapped up fairly neatly with The Ancient Gods DLCs. Regardless, I definitely enjoyed my campaign experience even if I have no motivation to go back and grab and remaining secrets or collectibles. Fans and completionists may enjoy that but they will likely be able to grab everything in their first initial playthrough due to the game’s relatively easy level design.

Gotham Knights Early Reviews are in and They Are… Not Great…

Full Schedule
<p style="text-align: justify;">Doom Eternal and its Ancient Gods DLCs are fantastic in terms of lore and universe-building. Learning about the Dark Lord and the true history of Hell is a treat that would certainly make lore buffs search thoroughly for the pages scattered around the levels. However, the game as a whole is rather dull in terms of repetitiveness.</p> <p style="text-align: justify;">The gameplay aspect of Doom Eternal and its DLCs all feel the same. The variety and abundance of different enemies keep things fresh only for so long before the combat starts to feel bland and boring. Kind of like the consistency of coconut or marshmallows. The first few bites are delightful but eventually, it all just feels the same.</p> <p style="text-align: justify;">In the end, my only desire to see the game's closing credits was motivated purely by the lore and history being explained before me. Overall, the game is fine but I can't imagine going back and replaying it, especially when its fairly easy to obtain all the secrets of each level on a first initial playthrough.</p>Doom Eternal and The Ancient Gods DLCs Are Flush with Lore but Repetitive Gameplay - Review