'Tis the season for delays, apparently...

2020 is going to be jam-packed full of amazing games that we can’t wait to get our hands on. Unfortunately, they are all being delayed to later in the year and now we have to wait even longer before we swing Cloud’s Buster, smash things as Hulk, or augment our arms and legs with bio-technical enhancements.

Crystal Dynamics announced on Tuesday morning that it is delaying its Marvel’s Avengers video game. The game was originally set to come out on May 15, but will now not be released until Sept. 4.

The team behind Marvel’s Avengers game, Crystal Dynamics, stated earlier this week that the game is no longer coming out in May, but has instead been pushed back to September 4. Here is their direct statement on the delay:

“We committed to delivering an original story-driven campaign, engaging co-op, and compelling content for years to come,” the statement from Crystal Dynamics says. “To that end, we will spend this additional development time focusing on fine-tuning and polishing the game to the high standards our fans expect and deserve.”

Seems like it has been ten years already waiting for this game to release, and now it seems like we have to wait a little longer, but not by much. The remake was supposed to have its first episode release this March, but it’s been pushed back a little over a month to April 10. Not a big deal, we want this game to be perfect, but we are really worried that later episodes will be delayed as well.

Producer Yoshinori Kitase of Square Enix made a statement on the delay:

“We know that so many of you are looking forward to the release of Final Fantasy 7 Remake and have been waiting patiently to experience what we have been working on,” Kitase said. “In order to ensure we deliver a game that is in-line with our vision, and the quality that our fans who have been waiting for deserve, we have decided to move the release date to April 10, 2020.”

Then there is Cyberpunk, the highly-anticipated game from the team behind the acclaimed Witcher series. This game is going to be massive with lots to do, and now we have to wait until September 17th to enjoy it. Again, you can’t rush perfection, and we are okay with delays to get things right on release rather than releasing a broken game and rushing to patch it afterward (ahem, Bethesda, Bioware, Bungie, etc).

We have important news regarding Cyberpunk 2077’s release date we’d like to share with you today. pic.twitter.com/aWdtR0grYV 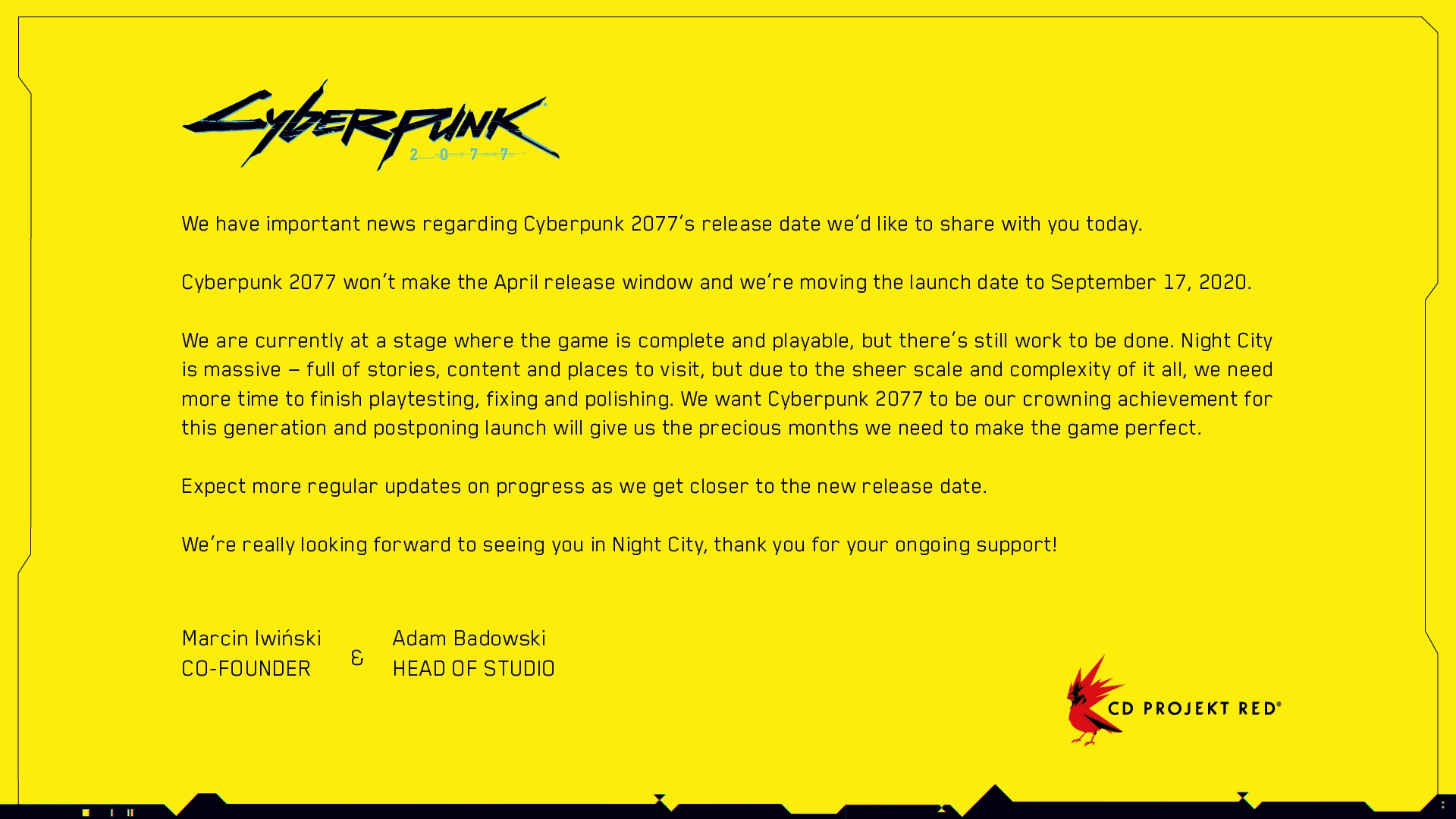 Okay, so we have to wait until September for two big games this year and we get Final Fantasy in April, presumably. And even though these games look great and are likely to sell well and even more likely to entertain us with hundreds of hours of intense and interesting gameplay, we highly suspect that they will release with game-breaking bugs that will need to be patched on day one. Oh well, it happens, I suppose…