Taking on the role of Wolverine would arguably be one of the most difficult things the young actor could do. That said, he did play Elton John incredibly well.

Two days ago a comic book fan on Twitter pointed out comic book writer Mark Millar has, on occasion, been able to ‘predict the future’ when it comes to actors taking on the roles of Marvel’s most famous superheroes. After all, Mark Millar was involved in the Marvel’s Ultimates when Nick Fury was modeled after Samuel L. Jackson and the comic book writer dropped Robert Downey Jr.’s name before the one and only Iron Man took on the role of Tony Stark. 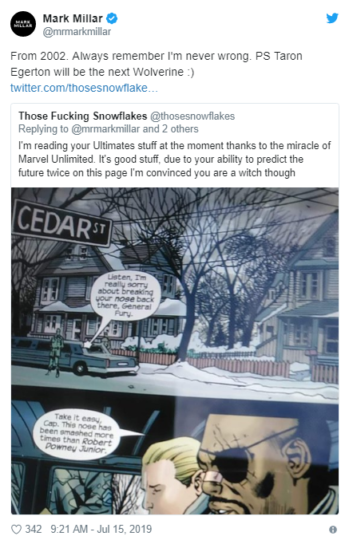 Nonetheless, this is really nothing more than a rumor at the moment. Afterall, Taron Edgerton and Mark Millar know one another fairly well considering Mark Millar was the creator of the Kingsman comics which ultimately lead to Taron Edgerton becoming a major star in the film industry. Even Taron Edgerton himself believes it’s a rumor as well.

“That one I think is just a rumor. As far as I’m aware it’s unfounded. I don’t know if I’m quite grisly enough. I mean if the people at Marvel think I am, then great, let’s go. But I think there are probably better candidates. But I would love to be involved with that world somewhere.”

What Mark Millar has claimed to be true remains to be seen. With Disney acquiring Twentieth Century Fox and thereby allowing Marvel to hold the rights to its own mutant comic book characters, it’s no longer a question of ‘if’ but rather of ‘when’ will Marvel introduce the X-Men to the MCU. Furthermore, we shouldn’t forget about Dafne Keen’s incredible portrayal of Laura, AKA X-23, AKA Wolverine’s daughter in Hugh Jackman’s (supposedly) final performance as Wolverine in the 2013 film Logan. At just 11 years old, the actress absolutely nailed her role and by the end of the film, there was no doubt in anyone’s mind Dafne Keen’s Laura should be the rightful heir to the role of Wolverine.

Whether or not Marvel and Kevin Feige decide to bring her or Taron Edgerton into the MCU remains to be seen.