Depp's legal trouble continues to take its toll on the actor's life during the alleged abuse investigation between he and ex-wife Amber Heard.

Johnny Depp has had a rough go of things over the last few years or so amidst allegations that he allegedly abused and beat his then-wife Amber Heard. Now, it seems that Warner Bros. has seen enough, despite the investigation still being open with more truth out there that alleges Depp’s innocence. Turns out, the studio has asked Depp to resign from his role as Grindelwald in the Harry Potter prequel/spinoff series Fantastic Beasts where Depp has appeared in the role in two of five expected films.

The news came from Depp’s Instagram account earlier today, where the actor posted the details of his resignation from the early evening hours of London. Warner Bros. has allegedly requested that Depp step down from the role as the investigation continues as it is apparently earning enough attention to cause concern that all the commotion could cause considerable damage to the performance of the film financially. 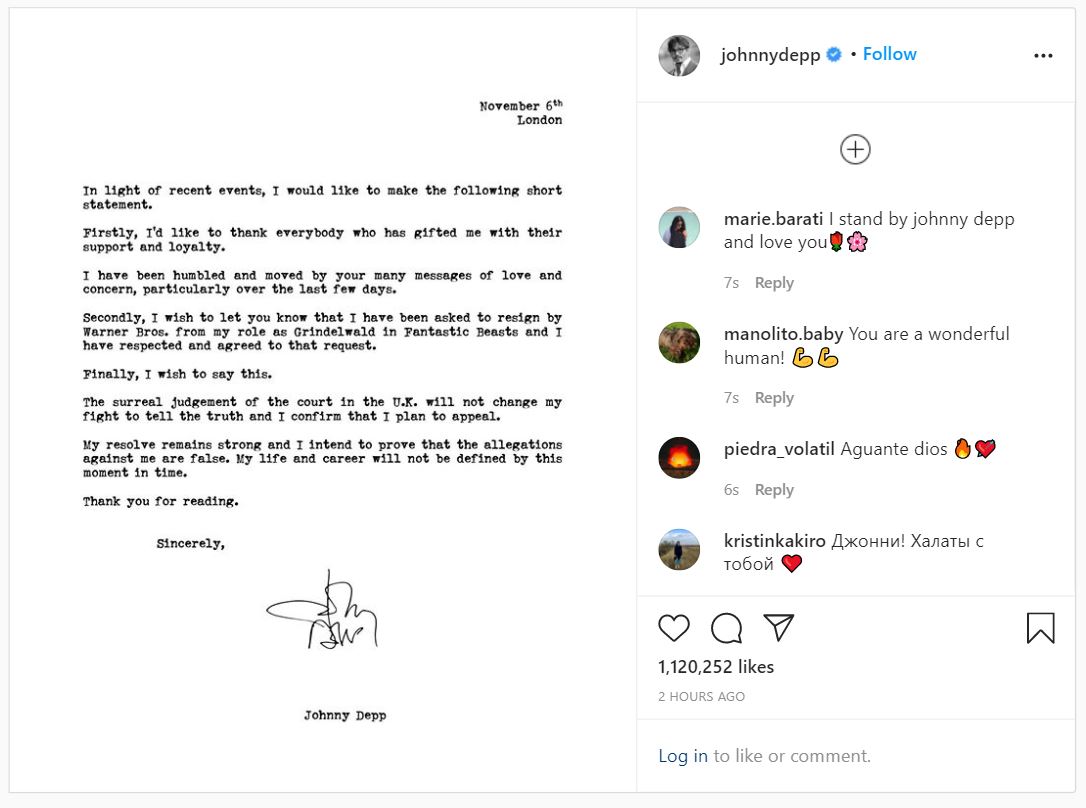 The third currently unnamed Fantastic Beasts film was scheduled to release next year in November, however, it seems that this target release date is no longer likely.

Depp’s ongoing struggle with his ex-wife Amber Heard has been quite the spectacle to say the least. Heard, who alleged that Depp has caused her abuse and beatings throughout their relationship, received massive support from fans and followers alike. During which time, Depp received quite the opposite, even though the seasoned actor remained quiet during all the accusations being thrown his way. The backlash then took a massive 180-spin after Amber Heard was caught on tape admitting that she was the one who had actually hit and allegedly beaten Depp, with acknowledging violent outbursts against her ex-husband that flipped the entire investigation on its ear.

Heard, who has been facing many troubles of her own since all this came out, claimed that Depp was the abuser, despite an overwhelming amount of evidence against her suggesting the exact opposite was truly the case, however, as we are not professional investigators or legal professionals ourselves, all of the aforementioned information must be heavily stressed as alleged, since the only two people who really know what went on behind closed doors is Heard and Depp himself.

While we are sad to see Depp depart from the role, we have to also stress that domestic violence is a serious issue that we do not take lightly. However, at this time we do not know the truth and we truly hope that justice will be brought to those in the wrong while the innocent can begin to heal.

If anyone you know has been a victim of domestic abuse, there is help. Please call the domestic abuse hotline for support resources.