All of Us Are Dead is the perfect combination of K-Drama and zombie horror.

As a rather new fan of K-Dramas, I can’t say I have much in the way of experience with the genre but when it comes to the undead, I consider myself an expert. Surprisingly, when I sat down to watch All of Us Are Dead, I was completely caught off guard by how much it scratched every itch I had for both.

Based on a web series by Joo Dong-geun from 2009 to 2011, All of Us Are Dead follows the story of a group of students in Hyosan High from all walks of life attempting to fight for their lives and escape their school while a zombie outbreak ravages the city. At its core, the series includes a delightful cast of characters that appropriately occupies every archetype space you can imagine in a school setting. The jocks, the science club geeks, the outcasts, the bullies, the snobs, the reformed tough guy, the hero, the heroine, they are all here and they shine brightly with just enough spotlight that feels proper in all the right places.

Nam On-jo and Lee Cheong-san have lived next door to each other for their whole lives. Close friends and nothing more, the two of them will have their relationship tested when all hell literally breaks loose among the halls of Hyosan and the dead begin to walk and eat their fellow classmates. Joining the two are the tough ex-fighter Lee Su-hyeok, the snobby Lee Na-yeon (played by Lee Yoo-mi of Squid Game fame), the class president Choi Nam-ra, and more. Of course, there are a lot more characters than would be reasonable to name but they are all incredible, especially but not limited to the villainous Yoon Gwi-nam (seriously, this guy is an awesome villain for so many reasons). Gwi-nam, played by Yoo In-soo, deserves all the praise for his demented, deranged, and dangerous portrayal of Gwi-nam. I can’t exactly go into why but his menacing approach from full-on bully to something much, much worse should be recognized throughout what we hope is a long and prosperous career. 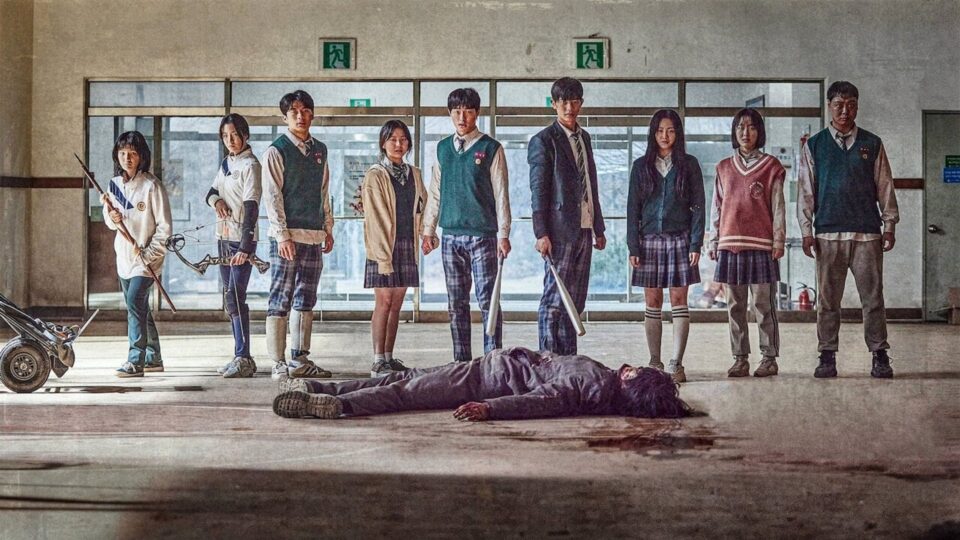 I want to highlight the cast as much as I can here and for good reason. It isn’t often that you get such a large group of characters that has enough time to stand out and receive just the right amount of character development that encourages the audience to feel a certain way when they make a smart or bonehead choice that leads the group at large to salvation or certain peril.

As the class begins to figure out details of the virus and how it spreads, they turn to each other for support by tapping into each’s own set of skills. The science club nerd has some specialty here as do the athletic types like Su-hyeok (seriously, this dude has mastered the Leonidas Spartan kick to an art). In fact, another really great attribute that AoUAD has going for it is the choreography. There are some really great fight sequences and truly impressive terrain traversal from within the school during the height of the chaos. I won’t say more than that but I think you will enjoy that. Especially in the library. That is all I am saying.

Overall, the show never feels like it is slowing down or dragging on in order to fulfill its 12-episode order. Unlike The Walking Dead, which feels like it goes on way too long at parts, the pacing and progression feel completely organic and natural with never the dull moment. Of course, all of this comes from my experience with zombie-related media but whether or not it completely covers the K-Drama side is another thing entirely. To what shouldn’t surprise you, it fulfills that side as well.

While I mentioned earlier that I am still new to the world of Korean dramas, you have to understand that there are really only two rules that must be followed in a K-Drama- it needs to be dramatic (which it is) and it needs to be Korean in origin (obviously). Anything else beyond that is just following tropes and cliches and even then, deviating away from those characteristics is good to subvert expectations and keep the audience in a state of surprise and shock. Which All of Us Are Dead does fairly well.

Look, you either love zombies or you do not. If you do, you will love AoUARD. This means you also either love K-Dramas or you don’t and even if you don’t, you can still certainly love this show. I happen to enjoy both myself so I think with certainty the only thing I can tell you is that if you don’t like zombies, gore, dramas, or Korean media, you really have no reason to avoid this series unless you don’t subscribe to Netflix. In which case, you should, and you should also watch this show first thing.

Full Schedule
<p style="text-align: justify;">Mixing Korean dramas and zombies is a great match when done right. Not that we have a lot of experience in that area ourselves but it seems Netflix and their team certainly know what they are doing.</p> <p style="text-align: justify;">The horrifying consequences of a science experiment gone terribly wrong, All of Us Are Dead does a great job at world-building while giving the large assortment of typical character archetypes enough time to shine and grow throughout the events that unfold for the audience. In no way was I ever bored while watching this show and I found myself completely invested in the heroes, the dopes, the jocks, the snobs, and the villains. Each character provides exactly what the series needs to feel completely fleshed out and well-rounded. </p> <p style="text-align: justify;">If you have any reservations about All of Us Are Dead, then I implore you to remove that and sit through and watch the series. Maybe over the course of a weekend where you have good snacks, good company, and 13 or so hours to spare. It'll be worth every minute. </p>Netflix's 'All of Us are Dead' is the K-Drama/Zombie Survival Series We Always Wanted - Our Review