State of Decay: Year One Survival Edition comes with a DLC that brings a new feel to the game.

[dropcap size=small]S[/dropcap]tate of Decay is an open world, zombie apocalypse survival RPG. The original game takes place in Trumbull Valley, where a group of survivors have set up a base to try to protect themselves from the zombie horde. The player is charged with making sure all the residents stay alive and are fully stocked with weapons, ammo, medicine, and upgrading their base. With all of this, the player and the survivors had no trouble gathering resources outside of their camp because everyone was well prepared.

The DLC Lifeline however brings completely different gameplay to the table. No more fully stocked weapons, no more stealthy attempts to slip past zombies, and no more rural town in a valley. Lifeline takes place in Danforth and explores the army’s struggle to try to contain and combat the zombie apocalypse. The player is tasked with keeping a group of survivors alive long enough to get them to safety, as well as defending their main base. Early into the game, it becomes clear that this is nothing like the original State of Decay. The player does not have a steady amount supplies readily available. There are more zombies then you have bullets, which makes killing the endless hordes of the undead exponentially harder. Lifeline brings a war story compared to the original game’s survival story.

The gameplay mechanics are well-developed in both aspects of the game. State of Decay brings both aspects of the zombie apocalypse and puts them into one easy to access game. The only complaint with Lifeline is that it is single player and due to the military setting, it would fit well with multiplayer squadrons. State of Decay developer Undead Labs have stated that they are planning to implement a multiplayer feature in later games.

State of Decay: Year One Survival Edition is out now for Xbox 360, Xbox One, and PC. 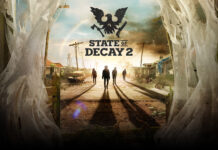