Hello? It is your childhood calling.

The early 90s were an odd time for children, specifically when it came to the subject of animated entertainment programming, much of which would undoubtedly be unacceptable by today’s standards. And yet, there were a handful of shows that were slightly less divisive that stood out by leaning heavily on anthropomorphic (human traits in non-humans, like animals and such) themes. And while the Teenage Mutant Ninja Turtles are, without question, the most popular of that niche genre, there were several other franchises that tried to follow in their steps. From the Street Sharks to the Biker Mice From Mars, and of course, the C.O.W.-Boys of Moo Mesa.

Each of these shows tried desperately to captivate young audiences with the charm and appeal of mutated animals that became humanoid while taking on the responsibility of dishing out brutal but often comedic Saturday morning justice. Of all of them, I think I found the C.O.W.-Boys of Moo Mesa to be the most odd, specifically in their origin.

The show, which was titled Wild West C.O.W.-Boys of Moo Mesa, was about a group of mutated cows that transformed into anthropomorphic hybrids after an irradiated comet crashlanded in the Western plains in the 19th century. The comet had not only caused mutations among the fauna but had formed a large, isolated ridge (known as a mesa) in the clouds. The radiation from the comet caused everything to mutate or evolve, forcing everything on top of it to become “cow-metized” (the use of cow puns was common in the show, with other terms like “cow-met” and “bovipomorphic” often being used). The cows eventually evolved into human-like beings that took on the way of life of the era of the Wild West and thus a civilization and law structure was built to keep the peace. In short, the show is basically about a bunch of cows that literally kick the shit out of each other and shoot guns. That’s all you really need to know.

At the head of that peace was Marshal Moo Montana (I laugh just thinking about it), Dakota Duke, and the Cowlarado Kid. These three were the C.O.W.-Boys (the term “C.O.W.” being short for “Code of the West”) and were ridiculously fun to watch as they beat up other cows and bulls for breaking the law. I am trying so hard to remember this show from my childhood but somehow, it found itself in my mental file cabinet for things I loved one day and completely forgot the next. 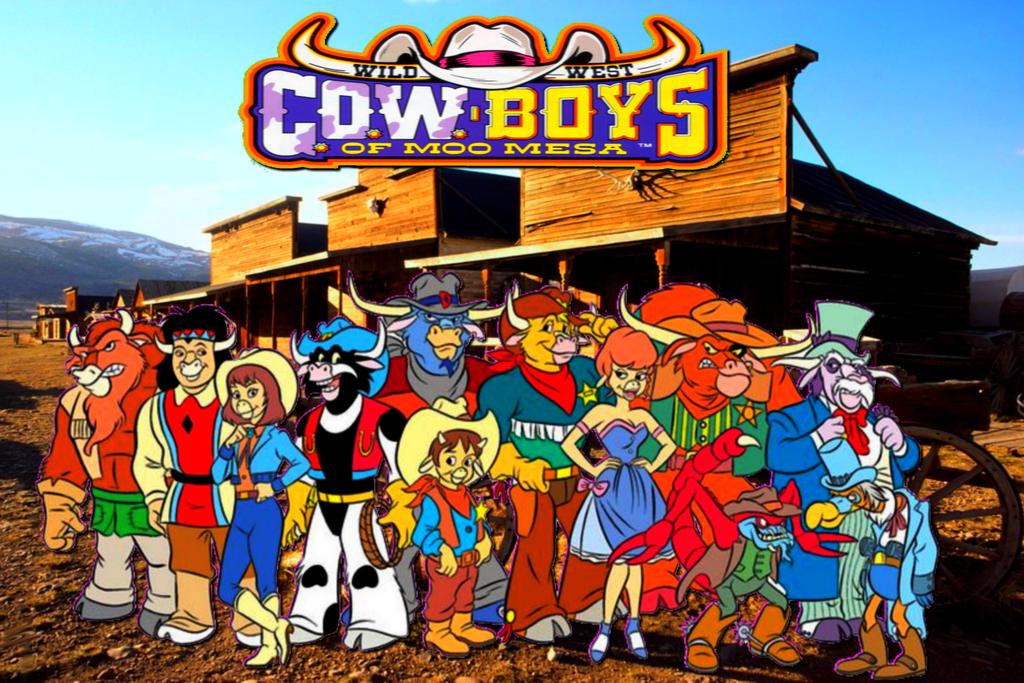 How f***ing awesome does all this sound?

What makes this show all the better was that it had a bunch of recognizable names in it, too. Tim Curry played Jacque Le Beefe, Jim Cummings played Dakota Duke, Joe Piscopo played Sheriff Terrorbull, Jeff Bennett played Cowlarado Kid, and Pat Fraley was Marshal Moo Montana. If you don’t recognize the names, you definitely will recognize their voices.

You can read more about all of these characters over on the Moo Mesa Fandom. I KNOW, THERE IS A MOO F***ING MESA FANDOM.

The intro and outro sequences also had one hell of a banger of a song that makes Garth Brooks and Rascall Flatts look like a bunch of hacks.

The series ran from 1992 through 1993 with 26 episodes but it did make a comeback on Toon Disney in the late 90s around 1998 and ran up until 2001. The show was created by renowned comic book artist and writer Ryan Brown, best known for his work on The Teenage Mutant Ninja Turtles under Archie Comics and for creating April O’Neil in 1985. Not surprisingly, the C.O.W.-Boys of Moo Mesa also had a brief comic run under Archie Comics but I don’t recall them ever crossing over with the Ninja Turtles. Which might have been one of the coolest things I could have ever imagined as a kid. Although, my little boy heart probably would have just up and exploded in between sessions of playing my Game Gear and drinking Yoo-hoo.

The C.O.W.-Boys of Moo Mesa is a franchise I remember fondly watching as a part of ABC’s Saturday morning lineup. However, I found myself spending more time with this series at my local pizza shop where an arcade game featuring the C.O.W.-Boys beckoned my name as I desperately tried to earn a top spot on the leaderboards of the side-scrolling beat-em-up game. Man, I loved that game so much.

While this series will always hold a special place in my heart from my early childhood days, I do hesitate to try and track it down for a re-watch. I remember the show being fantastic and I would hate to ruin it by allowing my jaded and overly-cynical adulthood to weigh in and critique it to pieces. On top of that, I have no doubt that the show is not even a quarter as good as I remember it and as I think about it, I know it would have absolutely no appeal to today’s generation. Still, this is one show that I am happy to spend a moment or two thinking about and reflecting on as I am reminded of simpler times.

If you are interested in experiencing more of the show for yourself (and why wouldn’t you be?), you can check out the first episode below via YouTube (since it isn’t available to stream anywhere). It is grainy as all hell but at least you can see why it was so awesome. Big thanks to Ms. Liz Ezor for putting this up:

Here are 10 Bingeable Comedy Television Shows You Should Watch, or Re-Watch