Jason Momoa is Right for Aquaman, Everything Else is Wrong – Our Review

Jason Momoa was the right choice to portray Arthur Curry, but everything else about Warner Bros. & DC’s Aquaman is so wrong that you’ll roll your eyes throughout the duration of the film wondering how this happened.

Aquaman was one of two DC movies I was really looking forward to (the other being Shazam!– to which I am still holding out hope that it’ll be good). Unfortunately, I made the poor choice to read reviews of Aquaman prior to being able to see it myself which impacted my already low expectations by moving them up a couple notches.

I had reservations about Aquaman, due to the poor track record of Warner Bros. and Snyder, but had some glimmer of hope to which I owe to my fandom of Jason Momoa, the film’s leading man.

Despite the reviews of critics stating the movie was “okay” and not “the worst DC film”, I figured this would be a good enough bar to be set to meet my already low expectations, allowing me to leave the theater satisfied just enough. But, once again, I left more disappointed than I thought possible. Let me explain…

Director James Wan, whose works are most notably from various horror franchises such as Saw, Dead Silence, Insidious, The Conjuring (you get the point) and the seventh installment of the Fast & Furious series, was tapped to take on Aquaman. For the life of me, I don’t know why. Perhaps it was the success of Furious 7, or maybe Warner Bros lost a bet. His resume does not strike me as someone who has demonstrated he knows what it takes to make a superhero movie. But, Wan landed the film and decided to create some obtuse hybrid blob, mixing of many genres, sprinkled with tropes, cliches, an entirely predictable plot (literally, from scene-to-scene), and a complete slop fest of CGI and head-scratching action sequences.

From a musically-skilled drumming octopus, to moving metal eyebrows on helmets (to express facial features like Deadpool, I guess), armed guards that look remarkably similar to the Power Ranger suits in the 2017 film, and so much excessive CGI that Aquaman made George Lucas’ prequel trilogy look like the original trilogy.

Regarding the plot synopsis, there is nothing new here. After already getting introduced to Aquaman in DC’s disappointing Justice League, we find ourselves a year later getting the origin story of Arthur Curry, a would-be king if it weren’t for his land-dwelling father, trying to find his way towards bridging the gap between his mother’s people of Atlantis, and the rest of the world.

Among the obstacles in the way are ex-navy seals turned pirates, mythical ocean beasts, bizarre creatures that lurk the unexplored depths of the seven seas, and Arthur’s own brother, Orm (Ocean Master). Orm would seek war upon the people of the surface world by using an ancient technology of the ocean that… is never fully explained. Basically, the magic of Thor and the technology of Black Panther is underneath the oceans for some reason and that’s the gist of it.

Using this technology, Orm plans on gathering the ocean’s forces to destroy all of humanity. Or something. And along the way Arthur has to go find an old magical trident to unite the oceanic kingdoms and this will prove that he is worthy to lead Atlantis and all the waterlands as its one true king. 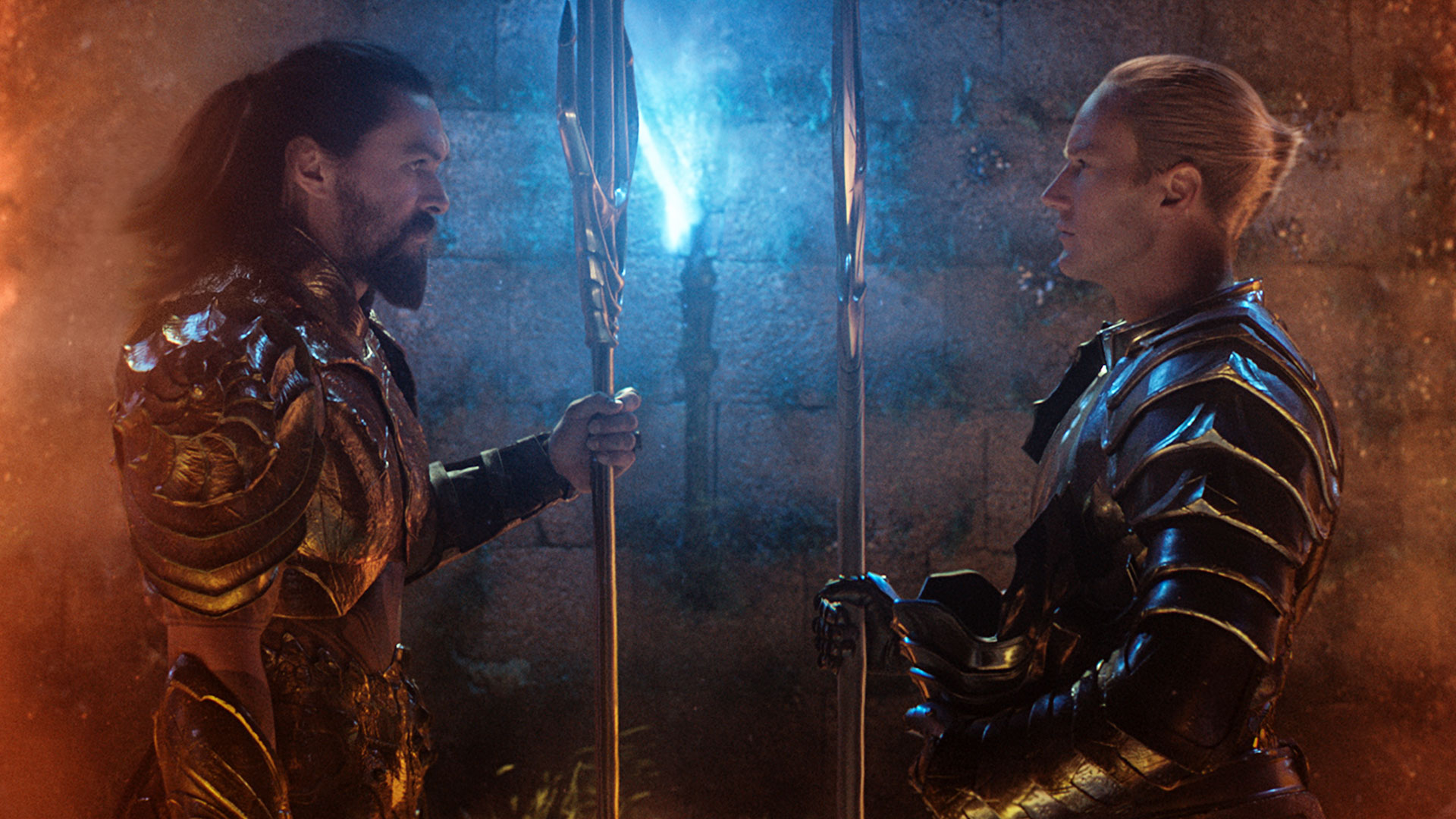 Look, Aquaman does nothing innovative to build on what we have never seen before in movies such as this, but it certainly leans heavy on everything we know about superheroes to tell it’s messy tale and then butchers it without mercy. With absurd tropes, messy plot points, and some of the most ridiculous action sequences and poor dialogue, all the while slapping ten tons of CGI onto every scene.

Just to focus on the CGI for a moment, I wanted to point out just how lazy it was. During a battle sequence involving the kingdoms of the oceans, there are some weird-looking ships that literally fly through objects with no collision of any kind. And this isn’t even a power of the technology. The effects team couldn’t be bothered to the point where, the ships, not even in the background but the FOREGROUND are flying through objects and walls during a battle with so much stuff going on, they either didn’t notice their error or figured the audience would be too distracted to notice.

Aquaman bank, putting it at the top of the DC Extended Film Universe. About a dollar for every moment I was disappointed by the terrible writing. (Courtesy of Box Office Mojo)

As if the CGI was the worst part of the film, the dialogue and logic behind every motivation of every character is so flawed that the final act of Aquaman revealing to the kingdoms that he had the trident (spoiler alert you don’t care), did nothing to stop the war at all. It was in fact his ability to talk to all the ocean life and telling the whales, and seahorses, and strange aquatic dinosaurs to stop fighting for the various races/factions/kingdoms that ultimately halted the fighting.

Aquaman then soon after faces his brother in a final battle where the winner is decided as the king. So, all Aquaman had to do was tell the creatures of the sea to just, go do something else, and then beat up his brother in a fight. The trident didn’t even matter in the end.

At the end of the film, I sat there scratching my head, wondering how any credible critic could muster up the audacity to give this film anything higher than a 4/10 rating. Because despite Jason Momoa being the perfect choice for Arthur Curry/Aquaman, every either decision was just a travesty, including choosing James Wan to direct and David Leslie Johnson-McGoldrick to write (he did Wrath of the Titans and a couple of the Conjuring films).

No idea how these two were tapped for a film that should have been the best DC had to offer up until now, because they ended up making a boring, sloppy, in-your-face, under water Avatar knockoff that made me furious that I found next to nothing enjoyable about the film in its entirety.

God, please let Shazam! be as good as the trailers make it look.

Here is the Official Trailer for ‘Dune’