Aladdin (2019): Not Exactly The Diamond In The Rough We Were Looking For. Our Review

Disney probably could have skipped out on a live-action remake of this one. But you know, money.

The internet rightfully freaked out a bit (ok, a lot) when it saw that first glimpse of a blue top-knotted Will Smith as the Genie. I’ll admit, I freaked out too. Everyone’s immediate reactions were bad. Really bad. But don’t worry! I’m here to put you all at ease and let you know that Genie is one of the few things that this movie actually does sort of right. We’ll get to everything else in a bit, but as for the Genie, Will Smith nails it.

Obviously no one can fill the great Robin Williams’ shoes, so it makes sense that Disney went after a familiar face with massive amounts of charisma. Will Smith takes this character and completely makes it his own. He pays light homage to the previous incarnation since the script is basically an exact retelling of the original, but he’s obviously having fun with it. Especially during the musical numbers as he adds a little bit of modernized rap flavor to each of them. I think he even made me laugh out loud a couple of times. Not to mention the character design is literally just a blue Will Smith with a smokey tail. Sometimes he’s not even blue, it’s just straight up Will Smith. I can think of a few other actors I could have seen play this role, but in the end, I can understand why Disney went the route that they did. Jack Black was probably too busy filming Jumanji. 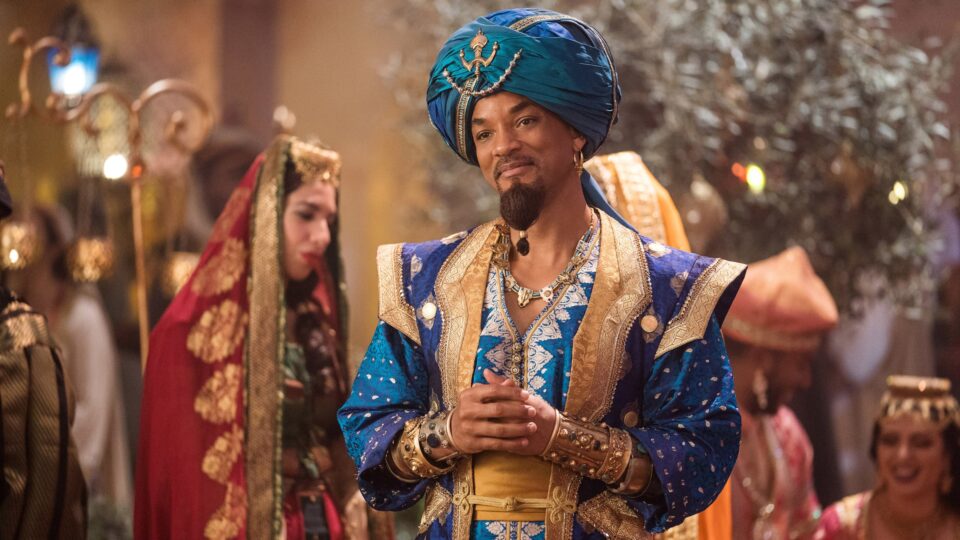 As for the other actors, Mena Massoud isn’t terrible as the titular character, but as an unknown actor this probably won’t be his launchpad to superstardom. For an actor to be able to pull off a character like Aladdin, they have to be likable. Mena Massoud just sort of stands around and says his lines without any emotion behind them, sometimes even going for an overly animated form of delivery that might have worked if this wasn’t live-action. His singing, dancing, and parkour moves are pretty solid though. I just didn’t buy him as a struggling vagrant. Mainly because he looked so fresh and so clean clean. Oh, and don’t even get me started on his relationship with Abu. I get that he’s not acting alongside a real monkey, but come on, I literally felt zero connection between these two supposed best friends. I guess it also didn’t help that Abu himself doesn’t really have much heart in this film either, he’s basically just a monkey doing monkey things, no emotion. 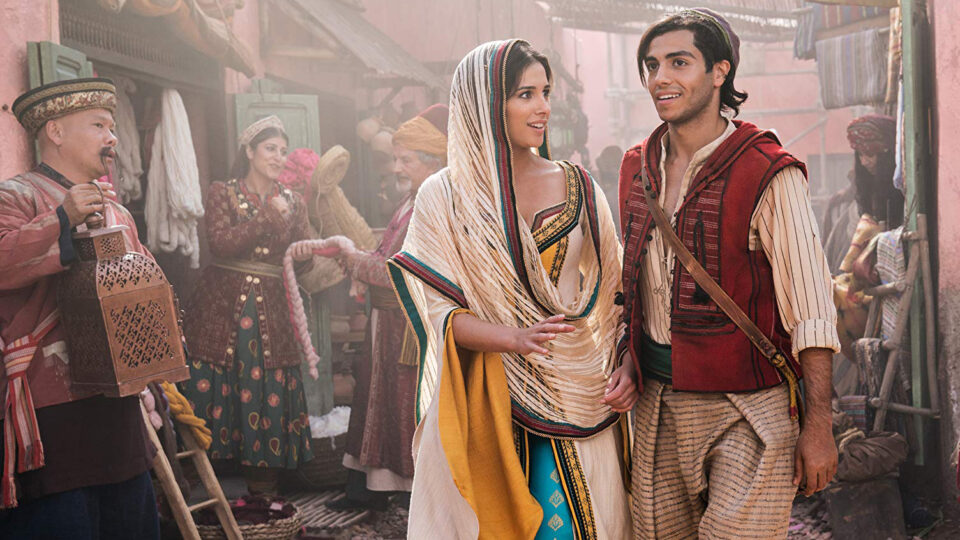 Jasmine, however, is near perfect casting. Naomi Scott does everything in her power to make sure that Jasmine gets her shining moments. Granted the script calls for a couple of additional Jasmine-driven musical numbers, but that just makes you like her more. Her acting is solid and her singing is even better. She beautifully belts out every lyric and you truly feel her struggle as she tries to prove her worthiness of the title of Sultan throughout the film. She definitely gets the most screen time, and rightfully so. This movie was always more about Jasmine than it was about Aladdin. Hell, it’s more about Jafar than it is Aladdin. In this film, Jasmine even gets a human friend/servant named Dalia, hilariously played by Nasim Pedrad. Don’t worry, she still has Rajah too. I’m pretty sure that Naomi Scott somehow got a hold of the list of all of my childhood crushes and is working her way down the list of their modern day reboots. First it was Kimberly/Pink Ranger in the Power Rangers and now this? What’s next, Kelly Kapowski in a Saved By The Bell reboot?

I wish the guy would have played him like an actual villain, looking sexy just wasn’t enough

The one character that I feel this movie truly lets down is Jafar. Jafar is no longer a sinister threat to Agrabah, but rather a background character used as a means of moving the story along. Realistically, all they needed to do was to get his voice right and they couldn’t even do that. He no longer sounds like an insane madman hell-bent on stealing the throne, he just pretty much sounds like Marwan Kenzari. Yeah, I didn’t know who he was either. Apparently he’s a pretty popular Dutch actor. Either way, I wish the guy would have played him like an actual villain, looking sexy just wasn’t enough. They even screwed up his partner in crime, Iago! Rather than having him as an actual talking character they just have him echo the tail end of Jafar’s sentences. Occasionally he might have let out an independent thought or two, but it was mainly typical parrot squawks. In fact, the voicing was so parrot-generic that I didn’t even realize they hired a big actor for the part until I saw the credits at the end. What a complete waste of Alan Tudyk. 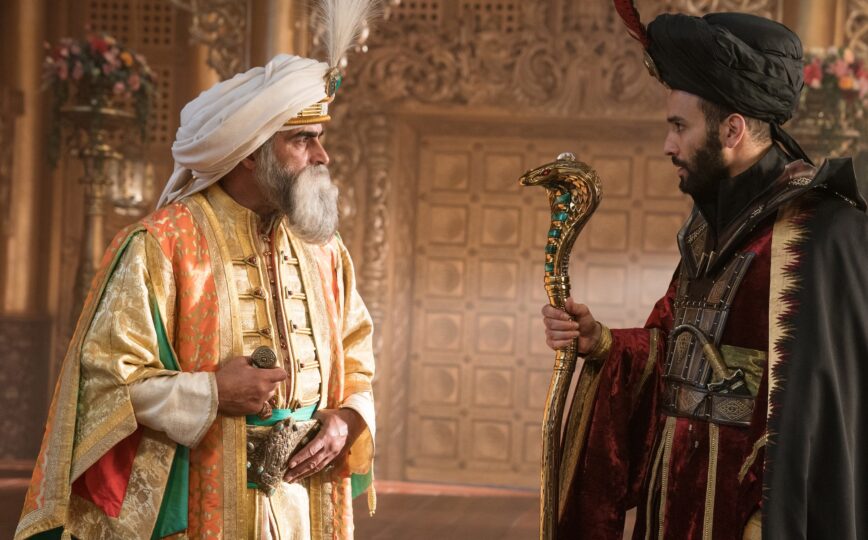 Ultimately, I think I have to blame the majority of this film’s flaws on its director Guy Ritchie. I like Guy Ritchie’s directing style as it applies to action, but it’s very obvious that he doesn’t really know how to direct a family-friendly musical. This movie is all about the music and how it reflects what the characters are feeling. If you can’t connect with that, you can’t connect with the film. I can understand modernizing a film to connect with a newer audience, but the people going to see these films aren’t new to the material. If anything they’re the complete opposite of that. I even tried to sing along at times but couldn’t because the lyrics to every song except for A Whole New World were altered for whatever reason. The choice to make Jafar’s voice normal or Iago just sound like a regular parrot, I gotta chalk it up to poor direction.

I don’t want this review to end on a low note because after it was over I didn’t exactly hate this film. The sets were beautiful, the musical numbers were exciting over-the-top productions, the vocals were perfect, the acting was decent, and they didn’t entirely screw up the Genie. That’s about the most I could really have hoped for from a live-action remake of a movie that I loved so much as a child. I could have probably done without this one, but if it has to exist, it’s not the worst form that I could have imagined.

Johnhttps://GeekOutpost.com
I was born, I pooped myself a bunch, I cried, took my first step, and then at the young age of eight my dad showed me a little film by the name of Pulp Fiction. My mind was blown. From that moment I learned to appreciate film on another level. To put it simply, I love movies.
Sign in / Join