The upcoming TMNT fill will truly embrace the "Teenage" side of the Turtles.

Back in April of last year, we reported that Seth Rogen and Evan Goldberg had some plans to reboot the TMNT franchise. What they shared at the time was their passion for the upcoming project along with details of the age, mindset, and personalities we can expect from each of the Ninja Turtles. And now, we know the official title and release date.

Curiously, the news did not come from Rogen or Goldberg directly but through a wall mural along the streets of New York City that revealed the title and the release date of August 04, 2023, exactly one year from now. 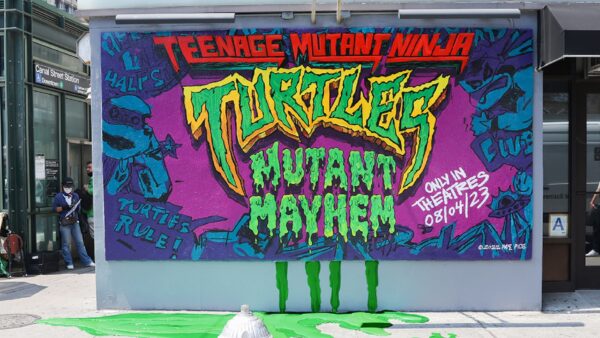 The film, which will be animated this time around, is still shrouded in a bit of mystery as no plot details have been given nor have we been informed what characters will appear in the film opposite the Turtles. What little we do know include the age of the turtles being fairly young and voiced by actual teenagers so it seems that Rogen and Goldberg are truly embracing the “Teenage” part of the Turtles very tightly. We assume that Splinter will be featured as he was the one to discover and train the Turtles but beyond that, we know next to nothing.

Teenage Mutant Ninja Turtles: Mutant Mayhem will be produced by Rogen, Goldberg, and James Weaver while Jeff Rowe (Gravity Falls, Disenchantment) will direct. The film will come from a screenplay by Brendan O’Brien and released by Paramount Pictures. No casting announcements have been made at this time.