Rockstar Games Tweets out a teaser image to get fans ready for an update on the highly anticipated sequel.

Not much is known about Red Dead Redemption 2, aside from two major things; the game is set to be released in the second quarter of 2018, and fans are dying to know more. Well, as you can see from the Tweet above, Rockstar Games is planning to do just that.

Developer Rockstar San Diego is behind the title (Red Dead Redemption, Max Payne 3, Midnight Club, L.A. Noire), so once again fans will undoubtedly be in for a treat. The previous title, Red Dead Redemption was released in 2010 for Xbox 360 and PS3, so it’s been more than a while since we last got to jump in the boots of a cowboy/outlaw in the early 1900s Wild West.

Currently, very little is known about the central focus of RDR2, but one would assume it would follow the footsteps of its predecessor with a large open-world gameplay with single and multiplayer game types. The trailer, which was released approximately one year ago, shows off the landscape which includes fast fields, forests, towns, and the same grit that players loved about the first game. Take a look below if you haven’t yet seen it.

If you are like us, then you are excited beyond words. So to make sure you don’t miss out, be sure to visit rockstargames.com this week and check back to GeekOutpost.com for more coverage. 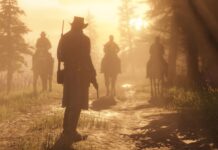 Red Dead Redemption 2 to be Released October 26 This Year