Fans of the popular Dragon Ball manga and anime series have widely shared their strong disdain towards attempts at making a live action film. The result of such attempts turn what could be one amazing cinematic experience into something that would make you leave the theaters cursing those responsible for putting together such a horrific travesty. Hollywood executives, big shot producers, all want to put their touch on something that otherwise should simply be left alone. Believe it or not, there a plenty of aspiring film makers and independent movie companies that could do the series justice, if they shared a passion for Dragon Ball (Z) half as much as fans do.

Robot Underdog has been working nonstop to put together what they believe (and we agree) is one epic transformation of the popular sequel/prequel/spin-off/side story (Timelines are confusing) of Dragon Ball Z’s History of Trunks animated film. They’re calling it Light of Hope, and it is shaping up to do the source material a proper justice.

If you need convincing, we don’t blame you. The idea of a live-action film on any anime is a scary thought, and add Dragon Ball Z into the mix, you’ll likely cause a riot among fans. But here is the difference between Fox/Dune and Robot Underdog; the latter are die-hard fans of the series.

When a property like Dragon Ball is up to hit the big screen at some point, you get all these different Hollywood corporate guys trying to put their spin and vision all over it. By the time the movie has gone into production, characters ethnicities get changed (Goku is an alien, not Japanese, so calm down), characters get left out (*cough* Krillin *cough*), and big name actors get cast into roles that they otherwise have NO idea about.

Light of Hope is one book you certainly don’t want to judge by its cover. Actually, go ahead and do that. Because so far, it looks AWESOME.

Our good friend Rita, the Executive Producer of the project, sent us a sneak peek into a fight scene teaser video they planned on debuting at their event at this years Anime Expo. And while she requested that we not share any snippets of the footage (we begged her but she insisted), what we saw got us even more excited.

Amy Johnston and Tyler Tackett (shown below) are playing Future Androids 18 & 17, respectively. And to be quite blunt, they not only look amazing as their anime counterparts, but the footage we have seen shows that they fit the roles flawlessly. Anton Bex will be Gohan, while Jack Wald plays the younger version of Future Trunks and Tim Neff portrays the older Future Trunks that takes down Frieza in the main timeline.

No word yet on exactly how many episodes are going to come about for Light of Hope, or whether or not Robot Underdog plans on doing any other anime or DBZ-related projects, but one thing is for sure, if you like what you see, odds are to likely be in our favor.

Thank you all for you support – we know this has been a long journey but we are still moving ahead full force & we’ll let you all know as soon as we have more updates! 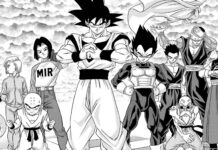 The Androids Are Coming to Dragon Ball FighterZ